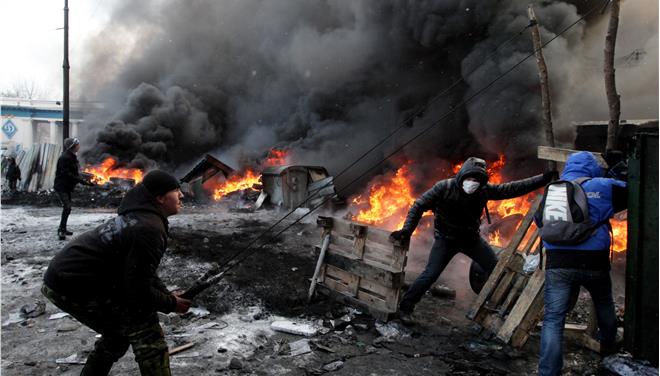 Greek Deputy Defense Minister Kostas Isichos called for an immediate end to the “continuously escalating violence” in Ukraine, announcing that there are plans for Greek Foreign Minister Nikos Kotzias to visit Moscow, Kiev and possibly Mariupol, where the presence of Ukrainians of Greek origin is strong.
In an interview on Greek radio on Saturday, he said that the Ukrainian government is held hostage by Euro-Atlantic rationales adding, however, that the Franco-German initiative can have positive aspects if military operations cease, even temporarily, particularly in the region around Mariupol where there are an estimated 100,000 Ukrainians of Greek origin.
Referring to the stepping up of EU sanctions against Russia which, in turn, responded with increased countermeasures against the EU, he said that it is an extremely dangerous path, adding that Greece supports efforts for rapprochement between the two sides.
Commenting on the relations between Turkey and Israel, he underlined that Greece should not only keep a balance but, at the same time, should be a pillar of stability and peace for the two sides and the greater region.
On the relations between Greece and Cyprus, he said that very close cooperation between the two countries is emerging in regards to their strategy aimed at disengaging or easing as much as possible the increased supervision sought by the partners, so that both countries can enter an economic growth path.
He clarified that there are big differences between the two countries, both economic and geopolitical, as well as regarding the agreements with the partners, but despite this, the governments of Greece and Cyprus will closely cooperate on the level of summit meetings where they can join forces on many issues.
Referring to the fight against the jihadists and what Greece will do if the United States requests its assistance, he said that Greece will very carefully examine its role in the fight against the jihadists, which is a necessary process by all countries.
On the demands that could be made by the United States in the fight against the jihadists, he observed that “it is the international community, many countries, who are interested in fighting against this plague. Therefore, our cooperation with all the countries, in the West and the East, against this threat is a very important factor.”
(source: ana-mpa)