Who Is Who in the New Greek Government 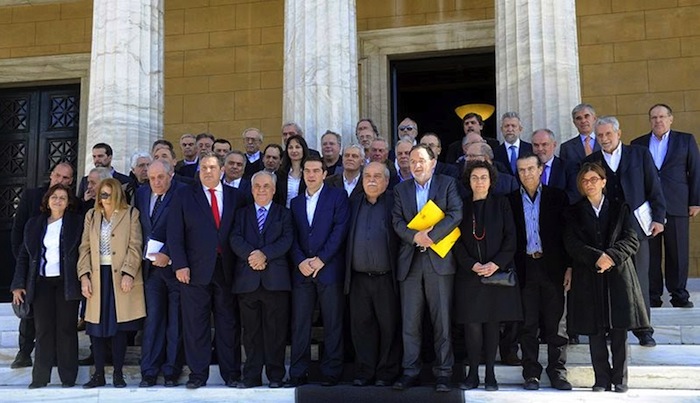 After the January 25 national election, the Greece’s new Prime Minister Alexis Tsipras rushed to form the country’s cabinet as soon as possible in order to start working on the reforms he promised during the pre-election campaign. The new cabinet was sworn in on Tuesday morning, January 27. Here are the members of the new Greek government:

Giannis Dragasakis
SYRIZA member and Deputy Prime Minister in the new Greek government. He studied political science and economics in Greece, as well as abroad. He has worked as an economist, researcher and business consultant.

George Stathakis
SYRIZA’s financial planning officer has taken over the newly formed Finance, Shipping and Tourism Super-Ministry. Stathakis is a professor of political economy at the University of Crete.

Thodoris Dritsas
SYRIZA’s main shipping advisor has been appointed as the new Deputy Minister of Shipping and the Aegean. Dritsas was born in Piraeus, in 1947. He studied law at the University of Athens.

Elena Kountoura
The former Greek athlete and Independent Greeks (ANEL) MP will be part of the new Super-Ministry as the Deputy Minister of Tourism. Kountoura was born in Athens. She has been part of Greece’s National Track and Field Team. She was the Greek champion in the High Jump and 100m Hurdles and holder of numerous national records, as well as national and international titles and awards.

Christos Spirtzis
The new Deputy Minister of Infrastructure, Transport and Networks was born in Athens in 1969. He has operated as Technical Chamber of Greece President since September 2010.

Nikos Voutsis
SYRIZA’s MP will be the new Minister of Interior and Administrative Reconstruction. He was born in 1951 and received a civil engineering degree from the National Technical University of Athens (NTUA).

Giannis Panousis
He is the new Deputy Minister of Citizen Protection. Panousis was born in Athens, in 1949. He was elected as a Democratic Left (DIMAR) MP in the 2012 election.

Giorgos Katrougalos
The new Deputy Minister of Interior and Administrative Reconstruction used to be a constitutional expert and professor at the Democritus University of Thrace. He actively participated the mass movements against the Memorandum.

Maria Kollias Tsaroucha
The new Deputy Minister for Macedonia-Thrace is a Greek politician and ANEL MP from the region of Serres.

Giannis Varoufakis
He was born in Athens, in 1961, where he finished high school. He later studied Mathematics and Economics at the University of Essex and Birmingham and used to be a professor of economic theory at the University of Athens. He was elected in the second Athens district with SYRIZA on the January 25 election.

Nadia Valavani
The new Deputy Finance Minister joined the ranks of SYRIZA in 2007,
when she participated in various social and political struggles.

Dimitris Mardas
The new Deputy Finance Minister is an Economics professor at the Aristotle University of Thessaloniki. He completed his postgraduate studies at the University of Paris I-Sorbonne and Paris II-Panthéon.

Panagiotis Lafazanis
The new Minister of Production Reconstruction, Environment and Energy was born in Eleusis, near Athens, in 1951. He is a Mathematics Department graduate from the University of Athens and a SYRIZA MP.

Giannis Tsironis
Greece ’s Deputy Minister of Production Reconstruction, Environment and Energy was born in Athens, in 1958. He studied chemistry and teaches Organic Chemistry and Biochemistry. He is a founding member of the Ecologists Greens party.

Vangelis Apostolou
Deputy Minister of Production Reconstruction, Environment and Energy, Apostolou was born in Euboea and lives in Chalkida. He used to be a Coalition of the Left and Progress MP in the Euboea region.

Panagiotis Sgouridis
The Vice Minister for Rural Development was born in Xanthi, in 1950.
From 2004 to 2009 he was a member of the opposition who constructively criticized the government policy of New Democracy.

Aristidis Baltas
The new Minister of Education was born in Corfu, in 1943, and studied Electrical Engineering at NTUA. He is a member of SYRIZA’s Central Committee.

Tasos Kourakis
The Deputy Education Minister and SYRIZA MP was born in Thessaloniki, in 1948.
He studied and teaches Medicine at the Aristotle University of Thessaloniki.

Nikos Xydakis
The Deputy Minister of Culture was born in Piraeus, in 1958. In the 2015 election he was a candidate with SYRIZA in the second Athens district. He studied at the University of Athens’ School of Dentistry.

Kostas Fotakis
The President of the Foundation for Research and Technology Hellas (FORTH)
was appointed as the new Greek cabinet’s Research and Innovation Deputy Minister.

Stavros Kontonis
The new Sports Deputy Minister was born in Zakynthos, in 1963, and since 1995 he has worked as a lawyer. He is a member of SYRIZA’s Panhellenic Coordinating Committee.

Panos Skourletis
The 52-year-old former SYRIZA spokesman and Alexis Tsipras’ close associate is the new Labor and Social Solidarity Minister. He was born in Athens and studied Economics at the University of Piraeus.

Theano Fotiou
An architect born in Athens who has also worked in Paris. She taught at the Royal College of Art in London, the College of London and various other prestigious institutions. She will be acting as the Deputy Labor and Social Solidarity Minister, as well as Erasmus and Socrates programs coordinator. She has served as a SYRIZA MP on the committee for European Affairs.

Rania Antonopoulos
The new Deputy Labor and Social Solidarity Minister to combat unemployment has worked as an Economics Professor at NYU. She was also a visiting professor at Barnard College, Columbia University and a specialist for the United Nations and the International Labor Organization.

Panagiotis Kouroublis
Kouroublis was appointed as Health Minister. In the past, he had served as General Secretary of Welfare. He has been elected three times in the region of Aetolia-Acarnania with PASOK, while in 2012 he was elected in the second Athens district with SYRIZA.

Andreas Xanthos
Greece’s new Deputy Minister of Health and Social Insurance from Crete has been
a SYRIZA MP since 2012.

Dimitris Stratoulis
The 57-year-old Deputy Health Minister is a lawyer, political scientist and
has a doctorate degree in legal work relationships.

Nikos Kotzias
Born in 1950, prior to his appointment as Minister of Foreign Affairs, he was a professor of political theories of international and European studies at the University of Piraeus.

Nikos Choundis
The new Deputy Minister of Foreign Affairs was born in Lagadia, Arcadia, in 1953.
In 2009 he was elected MEP with the Coalition of the Radical Left.

Euklides Tsakalotos
Before being appointed as the new Alternate Foreign Minister for International Economic Relations, Tsakalotos was a Professor aty Economics University of Athens. He was born in Rotterdam, Netherlands, in 1960. In December 2004 he was elected a member of the SYRIZA central committee.

Panos Kammenos
ANEL leader Kammenos will serve as the new Minister of National Defense. He was born in Athens, in 1965. He studied economics and psychology at the University of Lyon and the Institute of Business Administration and Management.

Kostas Isichos
Greece’s new Deputy Minister of National Defense is a member of SYRIZA’s Political Secretariat. He studied political and financial science at York University in Toronto and was a member of the Communist Youth party of Canada.

Nikos Tsokas
The Deputy Minister of National Defense is a retired major general.
He served at NATO in Brussels and was
responsible for defense policies.

Nikos Paraskevopoulos
The new Greek Justice Minister used to be a professor at the Aristotle University of Thessaloniki’s Law School. In May 2014 he cosigned the document supporting Tsipras’ candidacy for European Commission President.

Nikos Pappas
A close friend and associate of Greek Prime Minister Tsipras, Pappas will serve as State Minister. He is pro-European and wants Greece to remain in the euro, but is also against the Memorandum.

Panagiotis Nikoloudis
The new Transparency Minister was born, in Mani, Peloponnese, in 1949. He was elected with ANEL, while he used to be a Public Prosecutor of Greece’s Supreme Court.

Alekos Flabouraris
Born in Athens, the Government Work Coordination Minister used to be very active in the student movement. He was involved in the resistance against the Greek dictatorship. In recent years, he has been a close advisor for Tsipras.

Terence Quick
The former Greek journalist was appointed as Deputy State Minister. He was born in Thessaloniki, in 1947. He graduated from Panteion University and started working as a journalist in 1966. He is mostly known as a TV news anchor.

Gavriil Sakellaridis
The young government spokesman was born and raised in Nea Smyrni, Athens. He is an economist who appeared in the Greek political scene in the 2012 national election with SYRIZA.