Iron Fence Removed from Tomb of Unknown Soldier in Athens 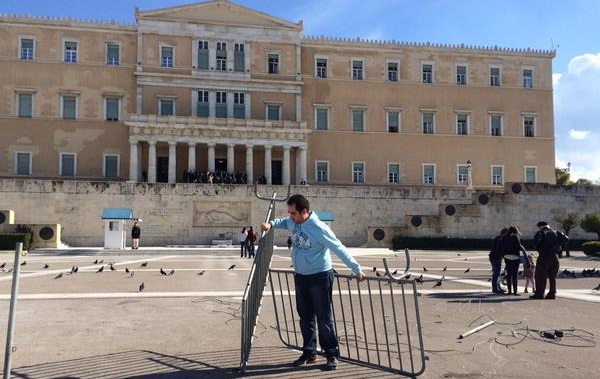 Newly elected Greek Prime Minister Alexis Tsipras proceeded with yet another symbolic move since he assumed office last Monday, by ordering the removal of the iron fence placed before the Tomb of the Unknown Soldier in Syntagma Square in downtown Athens. Minutes after the new cabinet members gave their oath, workers of the Athens Municipality took down the fence that was installed since 2013 in order to protect the Greek Parliament from the populous anti-austerity demonstrations that took place in Athens during the last years.

The fence were first placed there in 2011 but was later removed only to be permanently installed two years later. The fence’s removal is seen as a highly symbolic act by the SYRIZA-led coalition government, sending the message that no barriers should be placed between the government and the people. Citizen Protection Deputy Minister Giannis Panousis, who was behind the decision, underlined that “the symbolism of a Left government is necessary. We must show that we are not afraid of the people and, as such, remove the fence immediately.”

It should be noted that this is the new government’s second symbolic act, as Tsipras, just a few minutes after his oath in front of the President of the Hellenic Republic, Karolos Papoulias, on Monday, went to the Kessariani War Memorial, where he laid flowers in tribute to those executed by the Nazis during the country’s 1941-1944 occupation.