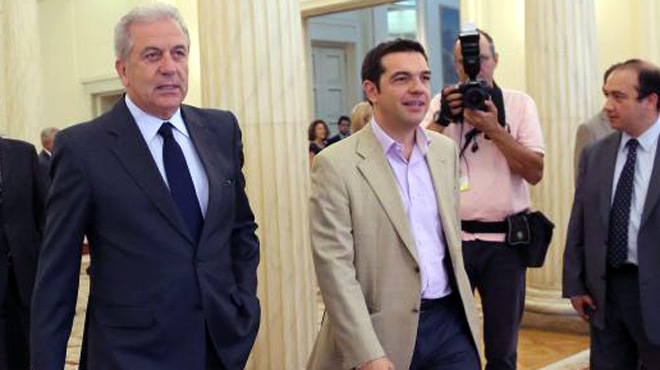 The European Commissioner for Immigration, Citizenship and Internal Affairs, and New Democracy (ND) member, Dimitris Avramopoulos, is rumored to be the SYRIZA-led coalition government nominee for the upcoming Presidential election in Greece. According to Greek newspaper “To Vima,” the first ballot for the election of the new President of the Hellenic Republic will take place on Friday 13.

As the newspaper wrote, Prime Minister Alexis Tsipras and National Defense Minister and Independent Greeks (ANEL) leader Panos Kammenos agreed that Avramopoulos is the most suitable to succeed Karolos Papoulias in the Greek Presidency, as he enjoys the respect of both political allies and other parties. This development, though, is expected to deepen the crisis in ND as Avramopoulos remains popular amongst the party members. So far, there has not been any official response by former Prime Minister Antonis Samaras and it is unknown if he will continue to support the candidacy of Stavros Dimas, who was nominated by ND during December’s unsuccessful Presidential vote. At the same time, sources close to the main opposition party underline that Samaras is caught in a deadlock by the new Greek Premier and a possible challenge of Avramopoulos’ candidacy would be unwise, as Tsipras’ decision to nominate a politician originating from the central-right wing is seen as a historic compromise.

ND MP Nikitas Kaklamanis reportedly stated that his party should be the first to support Avramopoulos’ candidacy, while another prominent party member, Evangelos Meimarakis, is also said to have supported this view during his latest meeting with Samaras.

At the same time, the European Peoples’ Party (EPP), a member of which is ND, is discontent with such a development, as it could result in losing a valuable officer, who may be replaced in the Commission by a leftist SYRIZA official with a different portfolio.

Moreover, until today, government spokesperson Gabriel Sakellaridis has not confirmed any agreement for Avramopoulos’ candidacy in the upcoming Presidential elections.