'To Potami' Leader: ANEL Has Far-Right and Anti-European Elements 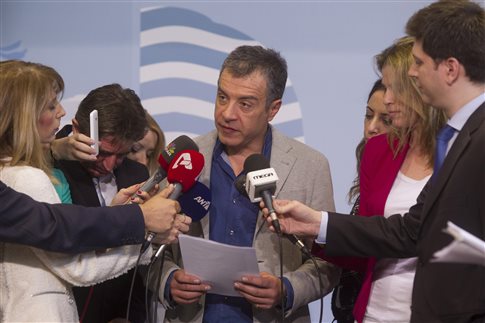 As a bad omen characterized “To Potami” leader Stavros Theodorakis the partnership between SYRIZA and Independent Greeks (ANEL), saying that Panos Kammenos’ party reflects far-right and anti-European views. In addition, Theodorakis clarified that he is expecting the new government’s program to be announced in order to decide whether his party will give a vote of confidence or tolerance.
“Today, ‘To Potami’ is the third democratic power in the country. This is a victory of society. Without money, without protectors, without agreements with vested interests and unions, we achieved the unachievable: To enter the Parliament with 17 MPs,” Theodorakis underlined yesterday after the election results were announced, giving his party 6.05% and 17 MPs. It should be noted that extreme-right Golden Dawn also elected 17 MPs, with 6.28%.
Expressing gratitude towards his party supporters and volunteers, Theodorakis said that “we won’t betray you” and highlighted that their vote was not a vote of anger, but one of reason and courage. After congratulating SYRIZA leader Alexis Tsipras for his historic victory, he underlined that this is no time for celebration. “The country needs to strengthen its position in Europe, heal its wounds and enter a path of growth. We need big changes and wide social alliances. Greece will not change just because a party will have, if it has them, 151 MPs. We need large majorities and a patriotic action plan,” he added.
Commenting on the smaller participation in this year’s elections compared to 2012, Theodorakis said this is a “bad sign,” adding that we must seek the real reason behind the votes of xenophobic Golden Dawn.
Finally, Theodorakis said that his party’s role is clear: To say “yes” when it agrees and “no” when the country is at risk.