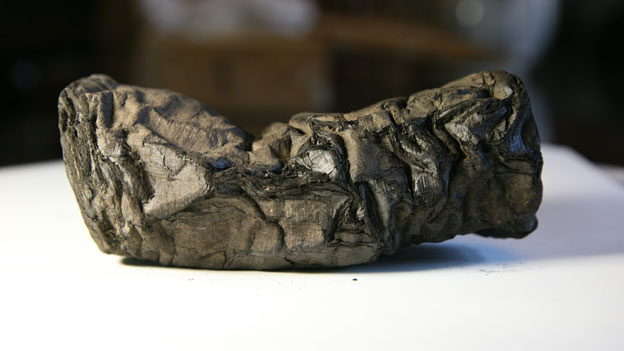 Scientists in Italy were able to read for the first time part of the Greek texts that were written on ancient scrolls – known as the Herculaneum papyri — that were burnt when Mount Vesuvius erupted.

The Herculaneum papyri are more than 1,800 scrolls found in the ancient Italian village Herculaneum in the 18th century, carbonized by the eruption of Mount Vesuvius in 79 AD. After various attempts of manipulation, a method was found so that scientists were able to read them.

Herculaneum was a resort during ancient times and it is often referred to as “the other Pompeii,” because it was buried in superheated pyroclastic material after the volcano eruption. It is also famous as one of the few ancient cities that can now be seen in almost its original splendor. In the 18th century, a group of archaeologists uncovered a remarkable library scroll that had been carbonized. In the beginning scientists attempted to unroll the burnt papyri, however, due to their fragile state many of them were destroyed.

Now, a team of physicists from the National Research Council’s Institute for Microelectronics and Microsystems in Italy, was able to read some of the Greek words that were written with ink on one of the scrolls without having to unroll it, using a 3D X-ray imaging technique used by doctors for breast scans. Essentially they used the X-ray machine to look for variations on the scroll make-up and created 3D representations of its internal structure.

The project required many hours of work and a lot of imagination because in several cases the scrolls had been crushed and their layers were stuck together. However, Dr. Vito Mocella, head of the scientific team, is currently trying to improve the method so that they can decipher more text in the future.