The Arithmetic Ahead of Monday's Final Greek Presidential Ballot 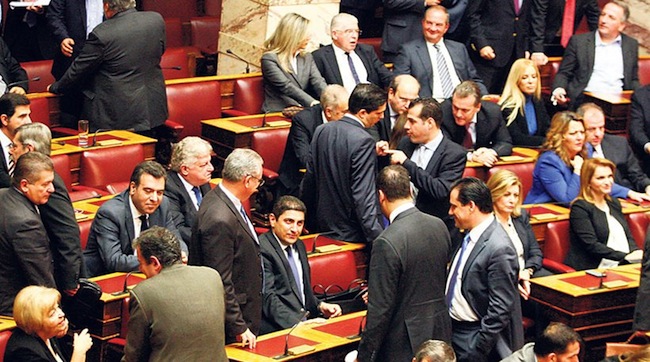 Only a few hours ahead of the third, critical ballot for the election of the new President of the Hellenic Republic — to be held tomorrow at noon — within a fluid political climate and with an increasing number of government MPs estimating (even if they don’t publicly express it) that the country is already heading to snap general elections, the last public appearance of Greek Prime Minister, Antonis Samaras’ at the Maximos Mansion is expected to have an impact.

Chances that this last interview could possibly make an admirable reverse are estimated to be low, but Maximos Mansion isn’t giving up the fight of attracting the additional 12 votes needed for the election of the new Greek President. The government is looking for the 12 MP’s votes from the remaining 12 independent MPs that have not voted in favor of the presidential candidate Stavros Dimas, during the previous two ballots and also among the parliamentary groups of opposition parties Democratic Left (DIMAR) and Independent Greeks (ANEL).

The only sure thing, is that without the additional votes from the parliamentary groups of DIMAR (currently consisting of nine MPs) or ANEL (currently consisting of 12 MPs) there is no chance the coalition government will manage to gather the needed 180 votes. Although on DIMAR’s end, after the departure of Niki Founta, there are still two MPs who could potentially be added to the majority to elect the President. The so-called “proposal of eight,” to find a consensual solution to elect the President was signed by Thomas Psyrras, who despite rumors remains with DIMAR and voted “present” in both previous rounds. Mr. Psyrras is rumored to be open to the possibility of a new initiative of the Prime Minister, the same goes for Nikos Tsoukalis.