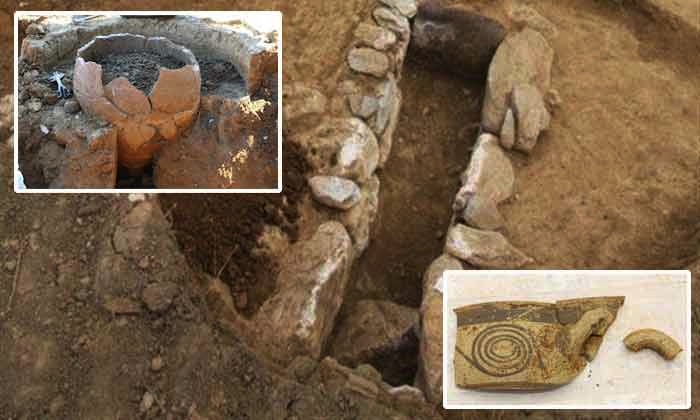 Excavations in Platamonas, Pieria, northern Greece, have unearthed an ancient settlement and burial ground that belongs in the late Bronze Age, around 1500 B.C.
The discovery was made in parallel to the construction of the new national highway and was officially announced by archaeologist Sofia Koulidou, head of Pieria’s Ephorate of Antiquities.
Archaeologists found 19 graves, some of them containing several objects such as Mycenaean style clay pots, bronze hoops, bone beads, bronze knives, clay flywheels, engraved stones and others. Some of the graves were very small and probably belong to children.
The remains of two arched buildings were also discovered, as suggested by the surrounding walls and the holes where the support beams used to be. The buildings were next to each other and it appears that there was a settlement next to the burial ground. The discovery of various household objects reinforces the archaeologists’ assumption.
Archaeologists say that this type of rectangular, oblong, arched building belongs to the middle Bronze Age, early 2000 B.C., and are rare in the particular area. The Mycaenean style objects suggest that the settlement was part of the Thessaly-Euobea cultural circle. Overall, the architectural style and discoveries provide valuable information on everyday life, death rituals and practices in the late Bronze Age.
The first arch, along with the outbuilding, will be transferred to be highlighted in the Livithra Archaeological Park on east Mount Olympus. Other excavation discoveries in parallel to the national highway construction will be also displayed.