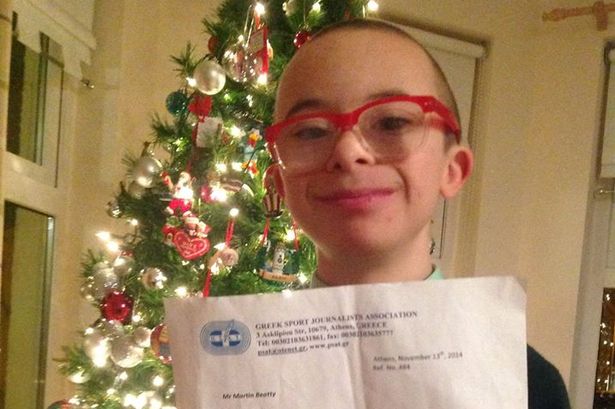 Jay Beatty, the 10-year-old Celtic fan who stole the spotlight when he was seen cheering for his hero, Greek footballer Georgios Samaras, during the World Cup, was invited to Greece to receive a sports award.
Samaras has developed a special bond with Jay, who has Down’s Syndrome. When the young boy traveled from his hometown in County Armagh, Northern Ireland, to watch the Greek footballer’s last game for Celtic at the end of the last season, Samaras asked the boy to join him in celebrating the team’s win.
“This boy gives me so much strength, it’s incredible. There are no words. I feel his love so much. This love I feel, is also felt by many people in Greece,” said the Greek striker.
The boy has gained an audience in Greece and the Greek Sport Journalists’ Association has decided to invite Jay and his father to the event for their 60th anniversary that will take place on Monday, December 15.
“Our association has decided to honor the friendship between Jay and Georgios Samaras, for the message of humanity and sensitivity that they sent worldwide,” noted an association representative.
“It’s hard to believe that a 10-year-old boy with Down’s Syndrome will be flying to Athens to receive this. To each and every one of you who has treated Jay with so much love and respect and to the Celtic support, this award is as much yours as it is Jay’s. Congratulations everyone and thank you,” said Jay’s father who is delighted that his son feels loved by so many people.