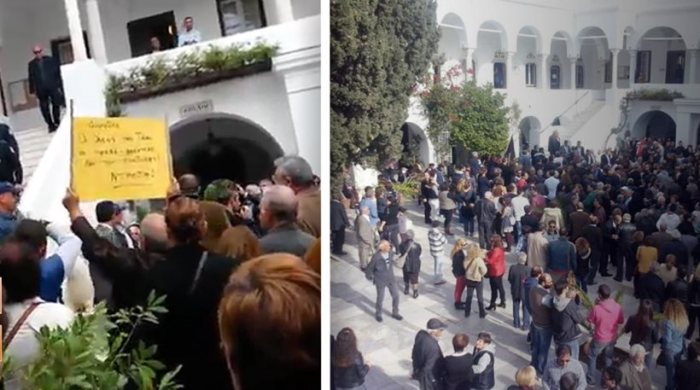 On Sunday, residents of Tinos showed their disapproval towards His Eminence Dorotheos II, Metropolitan of Syros, during a protest which took place in the courtyard of Our Lady of Tinos Church against the decision to change the Pan-Hellenic Holy Foundation of Evaggelistria of Tinos regime.
Hundreds of island residents gathered in order to show their disapproval towards the Metropolitan and the island’s archiepiscopal commissioner. According to residents the two men are responsible for the major change in the Foundation’s management which was passed to the clergy.
In fact, when the Metropolitan attempted to leave the building he was faced with an angry mob that threw water at him and called him “unworthy” which is a major insult for men of the cloth.
Sunday December 7, marked the elections day for the Pan-Hellenic Holy Foundation of Evaggelistria of Tinos managing committee. However, the elections result was found to be invalid since only 8 out of a total of 33 elector participated. Therefore, according to Greek law the foundation’s legal status will change from a Public Law Legal Person supervised exclusively by the State to being subject to Church supervision.
The Pan-hellenic Holy Foundation of Evaggelistria of Tinos was founded 200 years ago by several individuals who bequeathed it to the people of Tinos, who then excluded clergy members from the management committee. At the moment, according to the new law, the clergy will not be excluded from the foundation’s management, but the managing committee president will be the Metropolitan of Syros who will have the right to a double vote.