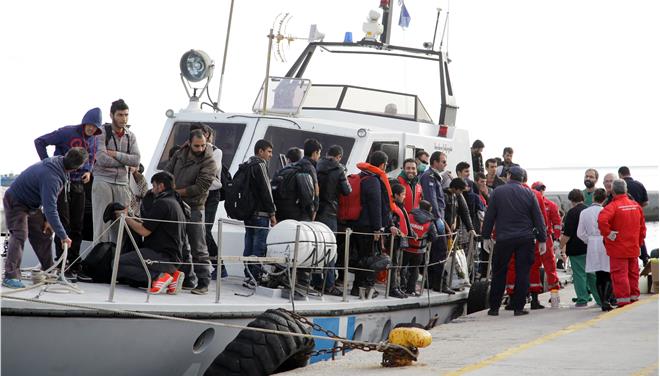 Doctors Without Borders (MSF) have stated in a recent report that Greece’s refugee reception system is “dysfunctional.” Thousands of migrants and refugees risk their lives to reach the Aegean Sea islands each year, where they are faced with inhuman living conditions.
“Many refugees, exhausted and often soaked from the sea-crossing, spend days sleeping outdoors or squashed in tiny police cells before being moved to the mainland,” noted the MSF report. “We have seen intolerable overcrowding, with 53 people crammed into a cell meant for six,” said MSF field coordinator Kostas Georgakas.
Greece and Italy are the main destinations for migrants and refugees who travel for days crammed up in smuggling boats in order to find a better future in Europe. This year, over 14,000 migrants and refugees have made the risky trip, crossing the Aegean from Turkey to the Dodecanese. Ninety percent of these people came from Syria, in search for shelter.
Syrians are quickly granted refugee status in Greece but most of them prefer to depart for other European countries, since the situation in Greece is not ideal. In an attempt to respond to the needs of migrants and refugees, whose reception is nothing short of appalling, MSF has implemented two emergency programs in the Dodecanese since August. A mobile MSF team has provided medical care to more than 350 refugees and has distributed more than 3,000 kits with basic supplies, including sleeping bags, soap and other hygiene-related items.
“Greece closed its land borders and now it must respond to the flow of refugees arriving on the Aegean islands with the dignity and respect that these people deserve,” said MSF operations coordinator for migration Manu Moncada. “Higher fences and inhumane living conditions on the islands will not deter the desperate, who will be forced to take ever more dangerous routes in search of safety, with many losing their lives in the process.”