Greek Gov't and Troika to Meet November 25 in Paris 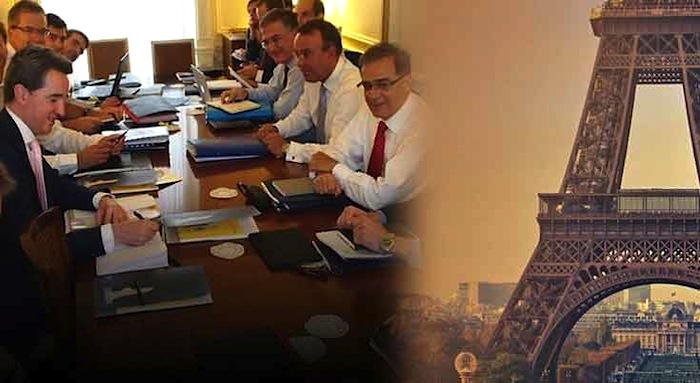 The Finance ministry on Monday announced that late on Sunday it was agreed that the government representatives and the troika would meet on November 25, in Paris, to speed up the evaluation process and decide on forthcoming steps.
Greek Finance Minister Gikas Hardouvelis, most likely accompanied by Deputy Finance Minister Christos Staikouras and Prime Minister associate Stavros Papastavrou, will travel to Paris tomorrow as the troika never arranged for a meeting with the Greek Government in Athens, Greece , as planned.
The European Commission said it’s premature to talk about next steps until the current review is resolved. The Paris meeting will focus on the current review and no discussion on extending the program is scheduled, according to spokeswoman Mina Andreeva.
“Both parties continue to work closely together with the aim of concluding the review and discussing how subsequently Greece can continue to strengthen its fiscal position and economic growth,” Andreeva said in an e-mail.
The two sides had previously met in Paris in September at the request of the Greek government, which felt that the repeated troika missions to Athens were disruptive and hoped that a change in venue would ease the path to a mutual agreement.
Government officials were seeking ways to bridge a rift with the country’s international creditors over the weekend after the budget for 2015 was submitted to Parliament without the troika’s approval.
What troika wants:
* Fiscal measures to cover the gap estimated at 2.5 billion euros for 2015
* A total rehaul of social welfare and insurance with a government commitment to proceed with pension reductions and increases to the retirement age.
* Abolition of the employment framework with measures for mass dismissals, lock outs and changes in the framework for strike action.
* Changes to VAT tax.
The Greek government excludes the possibility of the total measures that troika is demanding to be passed through and is seeking a more lenient compromise, however contact between high-ranking government officials and the troika have been idle.
Most of the intransigence is due to the position of the IMF that is constantly increasing its demands and seeking to stay in the country following the end of the current bailout. Pressure on Greece escalated after an EU leak stating that Greece will not exit the bailout before troika completes its review.