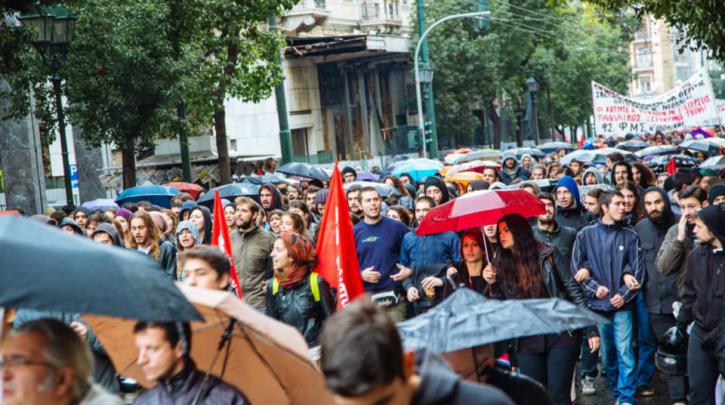 With no further tension and clashes was completed the second successive Pan-educational demonstration in Athens earlier today. Students, along with administrative employees and teachers, protested against the presence of police outside central university buildings in downtown Athens, accusing the government and Education Minister Andreas Loverdos in particular, for enforcing authoritarian policy.

The participation, despite the constant rain, was mass and the demonstration started from Athens University Propylaea, which was unreachable due to the students’ mobilization, and moved towards the city’s central avenues to pass by the Parliament and be completed outside the historic building of the Polytechnic School.

Earlier today morning in Thessaloniki, northern Greece, students occupied the administration building at the University of Thessaloniki as a reaction to yesterday’s police brutality in Athens. According to Greek media, the students removed the security guards from the building where the Deanship is located.

At the end of today’s demonstration, students and administrative employees announced dynamic mobilizations in the following days, ahead of the November 17 Uprising anniversary, which will be completed on Monday with the established demonstration from the Polytechnic School of Athens to the US Embassy.

Yesterday afternoon, in a similar demonstration held in Athens, students clashed with riot police outside the Law School of the University of Athens in the morning. During the clashes, two students were injured in the head by riot police batons, while later in the afternoon the tension rose again outside the Polytechnic School, when police made extended use of chemicals in order to prevent students from entering the building where they planned to hold a general assembly.