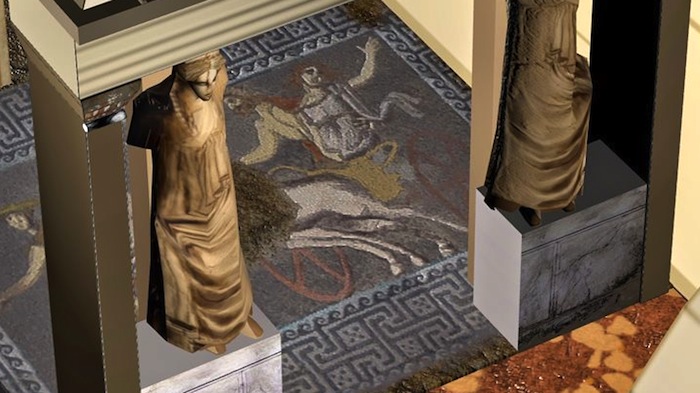 Greektoys.org released a 3D video presenting the Amphipolis tomb in northern Greece, including the impressive mosaic found inside the monument.
The mosaic depicts Persephone’s abduction by Pluto, in the presence of psychopomp Hermes, as is customary in such scenes.
Just behind the Caryatids, Persephone, dressed in a flowing white tunic with a thin red cord at the chest height and her left hand raised, stands out and charms the world with her beauty.
According to archaeologists, the new discoveries in Amphipolis confirm initial estimates that the tomb dates from the last quarter of the 4th century BC.
The abduction of Persephone by Pluto is a common theme in Hellenistic period artwork.
The Greek Culture Ministry describes the mosaic as stunning, superbly rich in color and artistic detail, that aspects of it appear as three-dimensional, the figure of Hermes in particular. Protection work has already begun with layers of styrofoam being placed over the mosaic. On top of that layer now rests a slab of wood. Forty centimeters above the protective layering, technicians will install a temporary wooden floor so that workers and archaeologists can walk over the mosaic and have access to the next chamber.
Watch the video below: