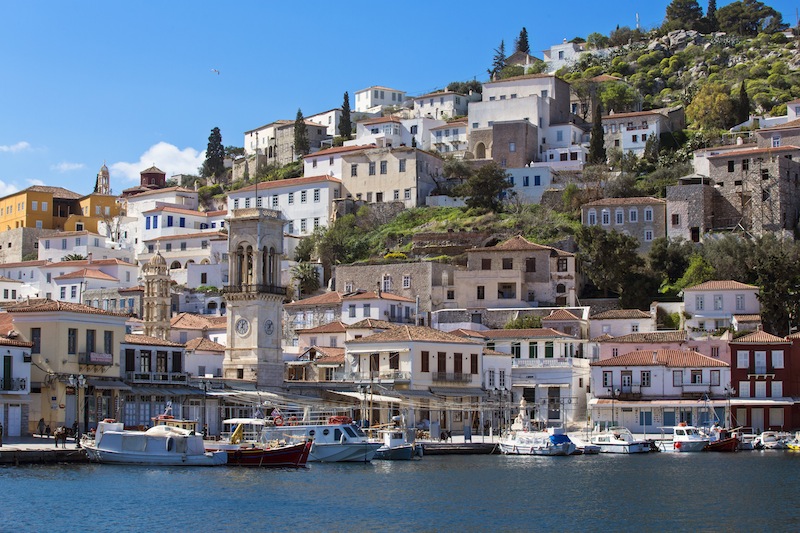 Hydra is one of the most picturesque Greek islands. It is located very close to Athens, just off the coast of Peloponnese in the Aegean Sea, between the Saronic and Argolic Gulfs. The island is easily accessible by boat or hydrofoil, however, there is a catch… Cars and motor vehicles in general are not allowed in the island by law.
Residents and visitors can travel from the main town to the island’s beaches and other small villages by water taxi, donkey or on foot. Only a small part of the island is inhabited, therefore most people prefer to walk from one place to another and wander around in the small, picturesque streets and alleys of the main town.
The municipality of Hydra consists of two main islands, Hydra and Dokos, as well as several small uninhabited islets. The main town, also known as “Hydra port” is quite small, with a crescent shaped harbor encircled by restaurants, bars, shops, galleries and stone houses.
The island of Hydra is also known for its artistic side. A part of the Greek School of Fine Arts is located on the island, in the Tombazi mansion, which was donated to the institution by the family. Furthermore, several Greek and international artists have been enchanted by the island’s beauty. Since 1960, Leonard Cohen has owned a house in Hydra, while the Rolling Stones and Pink Floyd used to regularly spend their vacation on the famous Greek island.
Hydra is the most unspoiled of the Saronic Gulf islands, which also include Aegina, Angistri, Poros and Spetses. Despite the island’s popularity, it’s natural beauty has remained intact. While other islands are expanding in order to accommodate the large number of tourists, Hydra has remained the same over the years. Only a select number of people can stay on the island due to the limited accommodation lodges and hotels, therefore it is recommended to book in advance or visit during off-season periods.
The main town’s waterfront offers a variety of activities for tourists. Hydra can please even the most demanding visitors. However, as it is common in most Greek touristic places, the village behind the busy waterfront is peaceful and quiet. Most residents don’t usually visit the waterfront, while artists and writers living on the island avoid the center at any cost during the summer months.
As for monuments and attractions, the Monastery of Panagia is located right next to the harbor. Even though the monk cells are now operating as municipal offices, visitors are able to admire the magnificent church and also visit the small museum located on the first floor. More adventurous types can follow one of the island’s many paths leading to various small villages, settlements and monasteries, such as the Monastery of Profitis Ilias, which is one hour away from Hydra port, or Moni Zourvas which is a three hour trek away from the main town.
Where to Stay:

Leto Hotel, of the Aqua Vista Collection,  is discreetly located in one of the island’s most picturesque alleys. The hotel is distinguished for the 4 star services it provides, in combination to the beauty surrounding it and the authentic architectural style along the island’s strict guidelines. Learn more here.