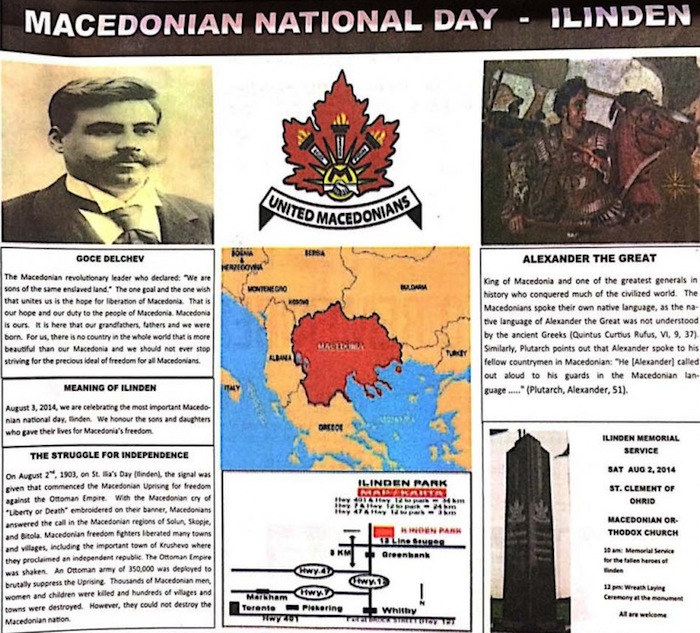 AHEPA Canada, one of the largest Greek organizations in the country, released an announcement condemning the publication of a map by the Toronto branch of UM (United Macedonians Organization of Canada) in the Toronto Star issue of July 31, 2014, displaying the irredentist claims against Greece and Bulgaria by ethnic nationalists from FYROM (see map above).

“Such maps depicting the entire Greek province of Macedonia and the Blagoevgrad prefecture in Bulgaria as being parts of a ‘United Macedonia’ along with a picture of Alexander the Great that the entire world and scholarly community (1) know was Greek are blatant and provocative acts that only serve to confuse the public, undermine harmony and fuel ethnic distrust and discord among ethnic groups and nation states,” read the statement.

AHEPA Canada believes that Canadian citizens -irrespective of their ethnic origin or religious background- ought to leave their ethnic and religious differences and animosities at the immigration gate. Once they become citizens of Canada they should strive to live in harmony and mutual respect with each other and focus on contemporary challenges that affect the wellbeing of Canadians in the interest of building a stronger country domestically and a more tolerant, peaceful and secure world internationally.

“Actions that blatantly attempt to falsify history, redraw national boundaries, spread hate, defame ethnic groups or nations only lead to conflict and pain, and should be avoided when the people of Greece, FYROM and Bulgaria share the same human challenges of securing peace, happiness and prosperity in the Balkans,” said the organization.