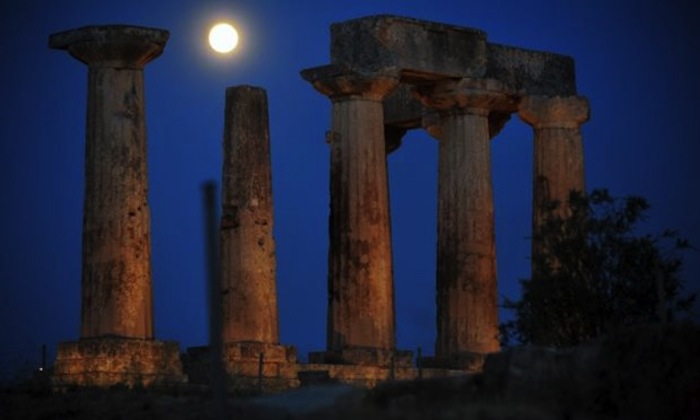 The magical August full moon will be celebrated across Greece with many museums and Greek archaeological sites staying open until midnight and presenting various events free of charge on August 10.
For the fourth consecutive year, the August full moon events offer great opportunity for all to enjoy music events, theatrical performances and participate in guided tours, under the moon light. More than 110 free events and late-night openings of archaeological sites and museums will be held giving visitors the chance to enjoy the biggest moon of the year in historical and heritage sites of ancient Greece.
The unique Odysseus Elytis poems will mark the events hosted by several archaeological sites and museums in Athens, the Cyclades, the islands of Northeastern Aegean as well as Delphi among others.
“In ancient times, both on the Aegean Islands and in Delphi, people worshiped the same god, Apollo, who was the personification of all those special characteristics that make the Greek culture unique: light, harmony, balance, measure, poetry, music. Since the work of Odysseus Elytis has condensed all these Apollonian elements of “Hellenism”, we chose his poetry as the theme of this year’s Full Moon events. We will also give visitors his text on a “Plan for an introduction to the Aegean”, which includes all images, feelings and thoughts of those who have lived or have visited and loved the islands of the Archipelago,” the 21st Ephorate of Prehistoric and Classical Antiquities said in a statement.
The Acropolis Museum will host opera performances by the historic Hellenic Air Force Band, in the museum’s courtyard at 9:30 pm.
“Our goal, in the hard times the country has been going through, is to enhance a feeling of optimism, pride and belief in our culture, and at the same time, since all the events are based on the work of volunteers, to showcase the values of offering, volunteering and cooperation, as we believe that these are our strongest weapons to deal with the difficult times we live in,” the Ephorate said.
Most museums in Greece will participate in the celebrations by having free admission from 9 pm onwards and will stay open until midnight on August 10. See the complete list of events and schedule below:
ATTICA

IONIAN ISLANDS
KERKYRA
Kerkyra Old Castle In collaboration with the Regional Theater of Corfu. “Under the full moon of August” music and poetry
ETOLOAKARNANIA

DELFI
Delfi Archaeological Museum Open to the public 8.00am – 10.00pm