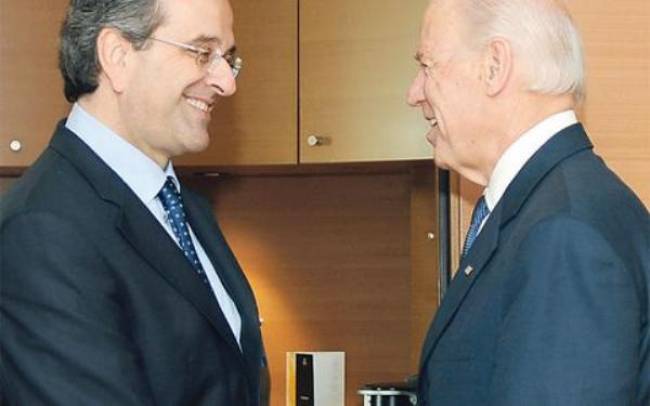 Greek Prime Minister Antonis Samaras and U.S. Vice President Joe Biden had a telephone discussion about the situation in eastern Ukraine and Cyprus.
According to the statement issued, “The two leaders expressed their appreciation for the strong bilateral ties and alliance between Greece and the United States.”  On Ukraine, the leaders agreed that Russia’s continued provision of heavy weapons and equipment to the separatists in eastern Ukraine require a firm and unified response from the European Union and the United States.
With regards to Cyprus, “U.S. Vice President informed Prime Minister Samaras about his recent trip to the island in May, and the leaders discussed their strong support for a comprehensive settlement to the conflict that would reunify Cyprus as a bi-zonal, bi-communal federation with political equality,” according to the statement.
U.S. Vice President Joe Biden reiterated Washington’s support for a solution to the reunification of Cyprus as “as bi-zonal, bi-communal federation” in a telephone conversation with Cyprus President Nicos Anastasiades last week.
A new United Nations-buffered peace push is expected to be the focus of talks when Anastasiades visits Athens the last week of July and during an anticipated trip to New York in September by the Cyprus President.
During his visit to Cyprus in May, the first by a U.S. Vice President in more than 50 years, Biden stressed that a settlement to the island’s long-standing division would lead to greater prosperity and security.
International interest in breaking the deadlock on Cyprus has increased since the discovery of significant undersea gas reserves off the island’s coast, and in the wake of the crisis in Ukraine, this may have repercussions on Russian gas supplies.

Free Concerts For The Full Moon At Monuments Across Greece