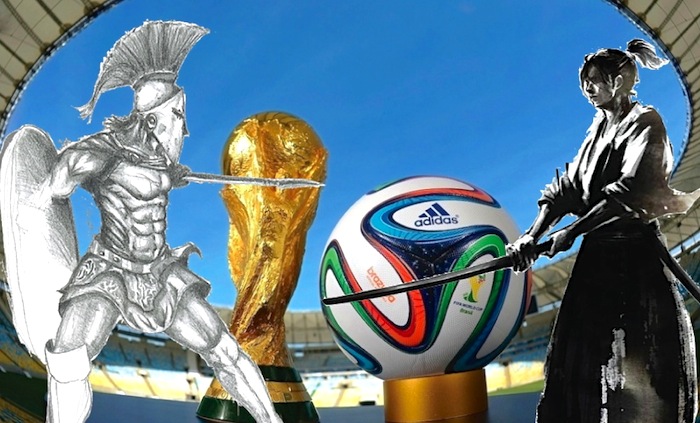 A defeat in the upcoming Greece vs. Japan World Cup match will be terminal for either team after Colombia triumphed over the 2004 Euro Champions (3-0) and Ivory Coast outmuscled the Asians (2-1) in Group C’s tournament opening in Brazil.
After Japan’s loss, AC Milan’s newly-signed Keisuke Honda claimed that his teammates are over their defeat and head to the next game in good spirits. Honda, who scored in the previous game against Ivory Coast and is the first and only player in Japan’s history to score in two consecutive World Cups said “We can deal with the loss, what we can’t deal with is not playing to our strengths”.
On the Greek  side, FC Levante’s starting right back and former Panathinaikos’ defender Lucas Vyntra sarcastically stated that if Greece had faced a defeat as hazardous as Spain’s over Netherlands, where the latter beat the 2010 FIFA World Cup Winners 5-1, the Greek players would not be allowed back in their country. Similarly, former footballer for the national team of Greece, Angelos Charisteas posted on Facebook how ungrateful most of the Greek fans are whom have achieved nothing in their lives, however they find it necessary to publicly derogate the national team’s players’ efforts in Brazil.
Greece’s history in the World Cups is far from horrifying. They’ve lost 6 out of the 7 games they’ve given, only beating Nigeria in 2010 after the West Africans went down 10 men. On the contrary, Japan has become Asia’s finest representative in soccer over the last decade qualifying for 5 consecutive World Cups while achieving the second round twice (2002 and 2010). They’re known for their efficiently fast passing attacking play and passion to fight till the last whistle is blown. Previously mentioned Keisuke Honda is the star player alongside Shinji Kagawa who plays for soccer Goliaths, Manchester United.
Fernando Santos, Greece’s coach, stated that the lack of luck is not an excuse for losing. A job needs to be done properly and they failed to do so. Their formation (4-3-3) will most likely be changed accordingly and possibly two of the three strikers who started in the game against Colombia, Fanis Gekas and Dimitris Salpingids, will sit on the bench. Their poor performance resulted in Greece’s scoreless defeat.
The game is expected to start at 7:00pm (local time) / 6:00pm EST / 1:00 am (Athens time) at Arena das Dumas, a stadium built for the world cup and which has a capacity of roughly 45.000. It is located in Natal, where Mexico faced Cameroon in Group A’s opening fixture.