GRNews
GreekReporter.comEuropeProtesters Pray for Hagia Sophia to Become a Mosque

Protesters Pray for Hagia Sophia to Become a Mosque 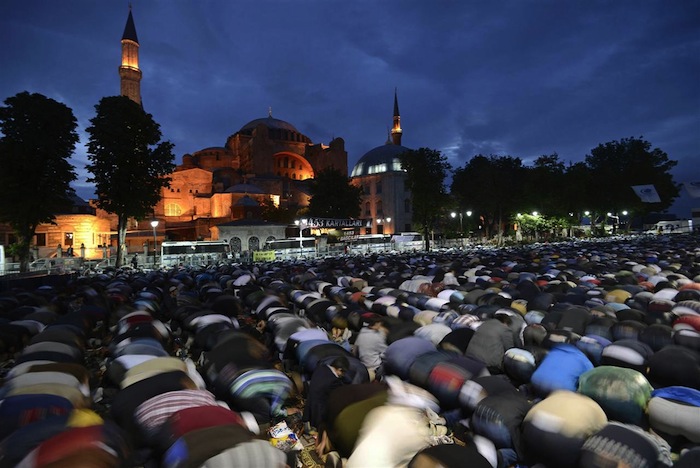 Protesters pray in front of the Hagia Sophia in Istanbul, Turkey, early Saturday, to show their support that it be converted into a mosque.

Built in 537 by Byzantine Emperor Justinian whose rule stretched from Spain to the Middle East, Hagia Sophia — meaning “Divine Wisdom” in Greek — was unrivaled in the Christian world until Ottoman Sultan Mehmet II conquered the city in 1453 and turned it into a mosque. Modern Turkey’s founder, Mustafa Kemal Ataturk, decreed it a museum in 1934.

Today, the Hagia Sophia (Ayasofya in Turkish) is officially a museum, however tens of thousands of Muslim worshipers gathering there on Saturday hope it will once again be a mosque — a dream they believe Prime Minister Tayyip Erdogan can fulfill.

There are even rumors — denied by the government — that Erdogan, a religious conservative who is seeking the presidency at an election in August, could lead prayers there one day soon.

Anatolia Youth Association (AGD) had called for the event that came at a time when several radical groups had been discussing the status of the museum.

Prominent imams, including Saudi Arabian reciter Shaykh Abdullah Basfar, were present at the event. The crowd left the area after the prayer chanting slogans that say Hagia Sophia should be a mosque.