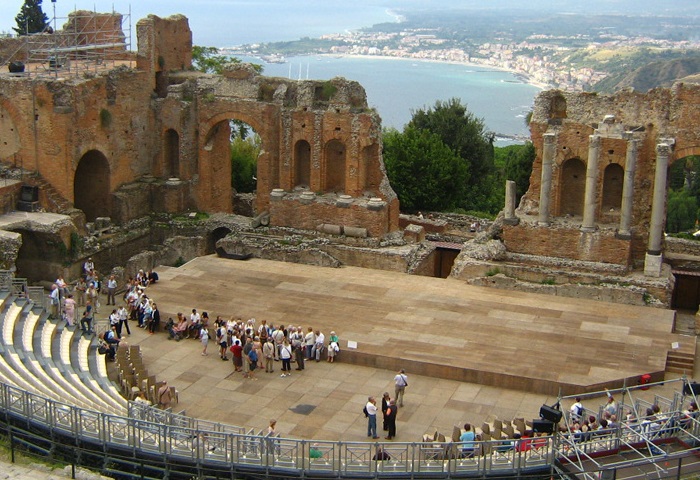 Syracuse is a historic city in Sicily, southern Italy, famous for its Greek culture and history. It was founded by the ancient Corinthians and Teneans and was one of the most powerful city-state of Magna Graecia (Great Greece).

One of the city’s most important ancient monuments is the “Teatro Greco,” an ancient Greek amphitheatre built in 500 BC. The “Teatro Greco” is still used for open-air performances staged by the National Institute of Ancient Drama, an Italian organization for the promotion of classical drama. Performances are presented in May and June, as well as concerts throughout the summer months.

The ancient theater is located in Neapolis Archaeological Park which also includes other ancient monuments such as a Roman amphitheater and the remains of the Altar of Hieron II, which dates from 269 BC to 215 BC. The large rectangular block of stone and steps is where the ancients slaughtered some 450 bulls  in ritual sacrifices to the Greek god Zeus. The site is full of quarries, known as the “Latomia del Paradiso,” which were housing the  prisoners of war captured by the Ancient Greek tyrant, Dionysius I. The park is considered the burial place of the ancient Greek mathematician, Archimedes.

The “Teatro Greco” and the Neapolis Archaeological Park are open to public from 9am to two hours before sunset.