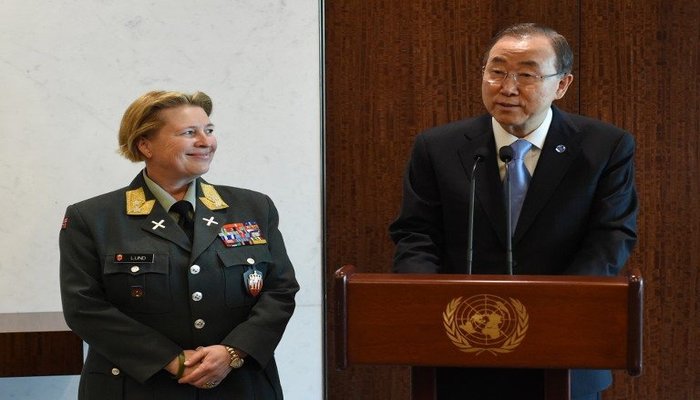 Major-General Kristin Lund has been appointed to head the United Nations Peacekeeping Force in Cyprus (UNFICYP), the first woman promoted to the position. UN Secretary-General Ban Ki-moon made the announcement May 12.
Norwegian Kristin Lund is the first woman to be appointed as a peacekeeping force commander and will replace Chinese Major-General Chao Liu at the head of the 1,000-strong UN contingent in Cyprus on August 13.
UNFICYP was established by the UN Security Council on March 4, 1964 to contribute to a return to normal conditions after the intercommunal violence and bloodshed between Greek Cypriots and Turkish Cypriots. Cyprus has been divided into a Turkish-occupied north and an ethnically Greek south since 1974.
“Major General Lund has had a distinguished military career, with over 34 years of military command and staff experience at national and international levels,” Ban Ki-moon said.
Born in 1958,  Lund graduated from the Norwegian Defence Command and Staff College, the Norwegian Defence University College and the United States Army War College. She joined Norway’s army in 1979 and participated in several UN missions, such as in the UN Interim Force in Lebanon in 1986 and in the UN Protection Force.
She also has solid experience of multinational operations, including deployment to Saudi Arabia during Operation Desert Storm in 1991 and with the NATO’s International Security Assistance Force headquarters in Afghanistan from 2003 to 2004. Moreover, she served as deputy commander of the Norwegian army from 2007 to 2009 and in 2009, she became the first female officer promoted to the rank of major-general and was appointed chief of staff of the Norwegian home guard.
Among others, Major-General Lund said that she had fallen in love with the UN while she was serving in Lebanon and when asked if she would want to head a peacekeeping force, she replied: “Yes, I love the UN.”
“I think it’s time, and I think it’s important that other women see that it’s possible also in the UN system to get up in the military hierarchy to become a force commander,” Lund added.