GRNews
GreekReporter.comGreeceTeacher & Mother of Three Wins The Voice of Greece

Teacher & Mother of Three Wins The Voice of Greece 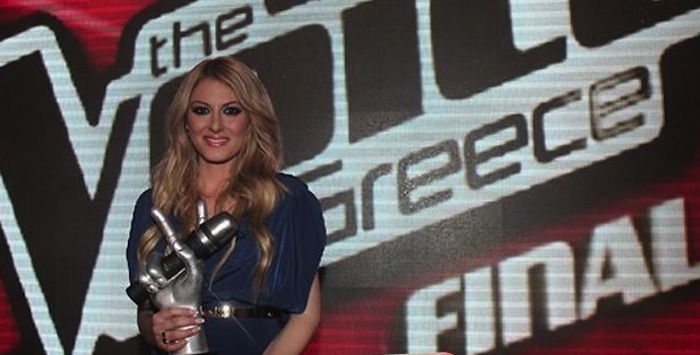 The audience of The Voice of Greece voted Maria Elena Kiriakou the winner of the talent show. The 29-year-old mother of three is from Larnaka, Cyprus. The Philology teacher who abandoned her teenage musical aspirations in order to teach at a high-school, has now landed a record deal with Universal.
Maria Elena did not even apply to the talent show, it was her brother who believed in his sister’s vocal talent and sent an application for her to The Voice of Greece. After passing the producer’s audition she went to the live auditions to join the team of popular Greek singer Despina Vandi.
In the final, the audience voted for 16-year old Areti Kosmidou to leave the show, making Maria Elena Kiriakou the winner of The Voice of Greece.
The other two contestants who made it to the final were Lefteris Kintatos, and Emily Haralambous.


The Voice of Greece premiered on January 10, 2014 on ANT1 (Cyprus and Greece). It is based on the reality singing competition The Voice of Holland. The coaches of the first season were Michalis Kouinelis, Despina Vandi, Antonis Remos and Melina Aslanidou.
There are four different stages to the show: producers’ auditions, blind auditions, battle phase and live shows. Producers’ auditions took place in Athens and Thessaloniki in Greece and in Nicosia in Cyprus.
The Voice of Greece is expected to come back for the second season in 2015.
Watch Maria Elena singing “Because of you” in the final:
Watch the moment the presenter announces Maria Elena as the winner of the Voice of Greece: