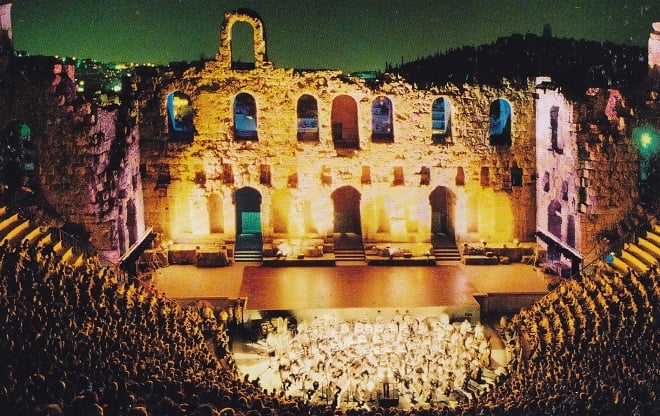 Odeon of Herodes Atticus in Athens Greece was placed second in the world’s top live performance theaters. The list was published by the prestigious Canadian newspaper “Globe and Mail” and it was entitled “Top venues for live theatre.”
This is a tribute that presents the best locations around the world where one can attend theatrical, dance and musical performances.
In regards to Odeon of Herodes Atticus, the article makes reference to the theater’s history, mentioning that it is considered to be one of the best examples of an authentic Greek amphitheater and it is described as the perfect place where modern music meets with the ancient ambiance. It is the perfect theater for all artists,” noted the article.
First place went to Minack Theatre, in Porthcurno, England, and Odeon of Herodes Atticus was followed by the Sydney Opera House in Australia, Teatro alla Scala in Milan, Italy, Carnegie Hall in New York, the Bolshoi Theatre in Moscow and other famous theaters from around the world.