Archive Film of Greece’s Liberation from the Nazis (Video) 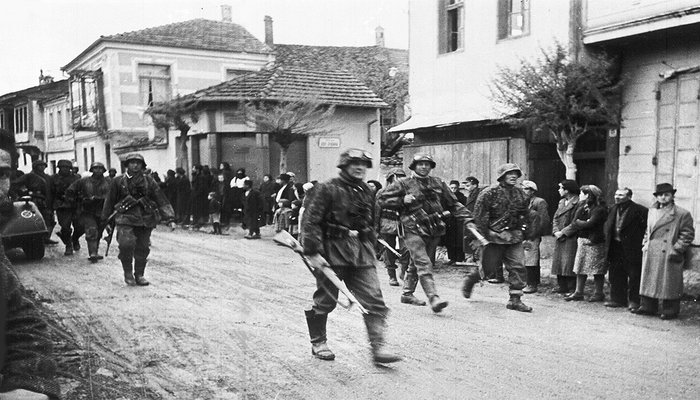 Among the archive footage released when British Pathé put its entire back catalogue of vintage newsreels on YouTube last week was film dating back in 1944 of Greece’s liberation from Nazi occupation by British and ELAS (Greek People’s Liberation Army) partisan troops.
The first recording, entitled ‘Return to Greece’, shows a British destroyer anchoring off Kythira island and landing troops to a warm welcome, as well as ELAS members marching. The film was shown in Greek cinemas on October 16, 1944, two days after the German evacuation from Athens, and aimed to stress the British role in Greece’s liberation.
It noted, however, the important role ELAS had played: “These men have done valuable work by speeding the evacuating Germans on their way.” The clip also shows a victory parade held in Patras, western Greece, to celebrate the liberation of Greece after the three-and-a-half year German occupation.
[youtube]6Z541dU1O78#t=194[/youtube]
The second video, “Liberation Celebration in Greece”, presents British troops parading through Greek towns and villages amid the celebrations of the liberated locals in the municipality of Corinthia, in Peloponnese, with their ELAS allies heading to Corinth. We can also see several placards of the local EPON (United Panhellenic Organization of Youth) and EAM (National Liberation Front) branches.
[youtube]bq7Am-XrZdQ#t=184[/youtube]
A third clip, entitled “Liberation of Greece”, was filmed on October 18, 1944 and shows the return of the Greek government to Athens. Greek Prime Minister Georgios Papandreou, who had been exiled in Egypt, is being welcomed by Greek military officials, religious figures and citizens. The Greek flag was then hoisted on the Acropolis and Papandreou also laid a wreath at the Tomb of the Unknown Soldier at Syntagma Square.
[youtube]1u28fQHI-GU[/youtube]