By Jeff Maysh
April 16, 2014
Facebook
Twitter
WhatsApp
Linkedin
Email
Her family had been moaning at her for years to dispose of the old boxes in the basement. Covered in cobwebs and spiders, they belonged to Doreta Peppa’s late father, and had remained unopened since World War II. Doreta, 50, finally prized open the boxes in November 2003, and found a secret haul of carefully wrapped oil paintings. In the dark, she traced a finger over a familiar signature— ‘Vincent’— and knew instantly that she was a millionaire.
But eleven years later, she says the discovery has left her penniless.
“I knew nothing about paintings,” she admits. “But I instantly recognized the style.” The ‘Vincent’ signature was of course used by the Dutch post-Impressionist master Vincent Van Gogh, best known for his iconic still life tournesols (sunflowers). “I realized I had found something special. I was in shock. I touched the painting and got a weird feeling in my stomach.”
The mystery box also contained a rare sketchbook by Van Gogh, and a stunning Cézanne nude among other artifacts. Experts told Doreta, a struggling author from Athens, that the haul could be worth $100 million, if its authenticity could be proven. So she earnestly dedicated her life to researching the artwork’s origins. 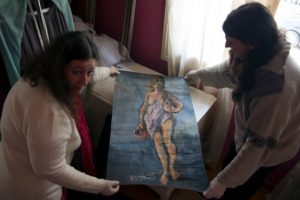 Her father, Meletis Peppas, was a Captain in the Greek Resistance during World War II. “My father had written in his journals about an October 1944 attack on a Nazi train in Greece,” says Doreta, “The train was struck as it was being loaded, and five or six people from the Resistance, including my father, boarded it. They fought with the Nazis and looted the train.”
“They wanted to steal the ammunition,” she says, but when the soldiers opened the large crates of guns and ammo, they also discovered dozens of carefully wrapped paintings. “The other soldiers were just country folk,” Peppas says. “They didn’t know what they had. But my father was an educated man, and an amateur art buff. So he decided to keep the paintings for himself.”
Works by Impressionists and modern artists like Van Gogh and Cézanne were considered ‘degenerate’ because Hitler preferred realism. As the Führer’s empire crumbled, he tried to offload his degenerate collection to raise money for the war effort. According to historical documents, Hitler’s art was admitted through the Louvre museum in France, where it was stamped. Paintings were then said to have been transported through Europe, destined for private sales.
World War II ended in 1944 in Greece, but the country swiftly fell into a civil war that raged from March 1946 to October 1949. “My father was a Communist and he was locked up for his political beliefs,” says Doreta. “One of my earliest memories is police coming to my father’s house. They forced him to give them names of other Communists, but he refused.” She pulls back the sleeve of her sweater, and shows scars that she says are cigarette burns. “I was just three years old,” she says.
Captain Peppas was released from prison during an amnesty in 1961, but still kept the paintings a secret. When Greece entered a dictatorship between 1967–1973, Doreta’s father believed the government would confiscate the works, so they remained hidden. When she was three years old, her parents separated. “My father didn’t want the family to carry on being in danger, because of his political leanings. He died in 1973 when I was ten years old.”
After the separation, Captain Peppas left the family home and stored all of his belongings, including the artworks, at a relative’s house in Athens. There they remained for over sixty years, totally undisturbed, until Doreta finally opened the box.
Her story tallies with recently de-classified documents from American forces that revealed the secret work of the ‘Monuments Men’— the inspiration for the movie starring George Clooney. The team of daring investigators uncovered troves of stolen art hidden across Germany and Austria. Some pieces were hidden in castles, others in salt mines.
If Doreta could prove the haul’s authenticity, her father’s paintings could be one of the most important art discoveries of the century. So she took the paintings to every expert she could find. 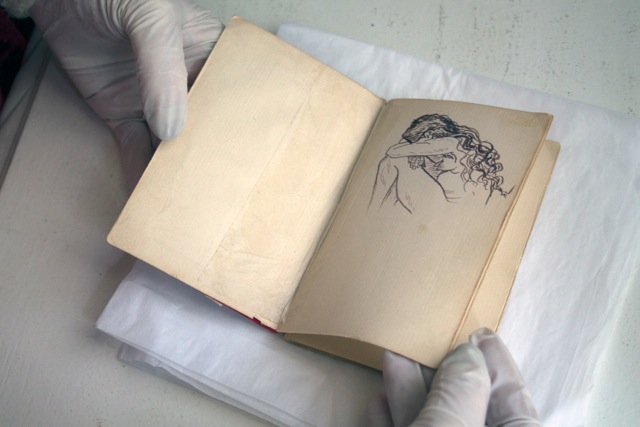 A specialist who examined Doreta’s notebook of Van Gogh sketches said it is likely to be from the Royal Academy of Art, in Brussels, where Van Gogh was a student in the late 19th century. Lab tests have confirmed the age and fidelity of the paper. A prominent art expert from a gallery in Munich also examined the notebook. Doreta says he broke out in a sweat, before telling her, “you’re a very rich lady, and I’m very happy for you.” If authenticated, he revealed the notepad could fetch $3.5m alone.

Doreta visited a leading facial recognition expert, Dr. Dimitris Berdelis, who inspected a photograph that was included in her father’s collection. He compared the image to authentic photographs of Vincent Van Gogh, and confirmed there was a match. 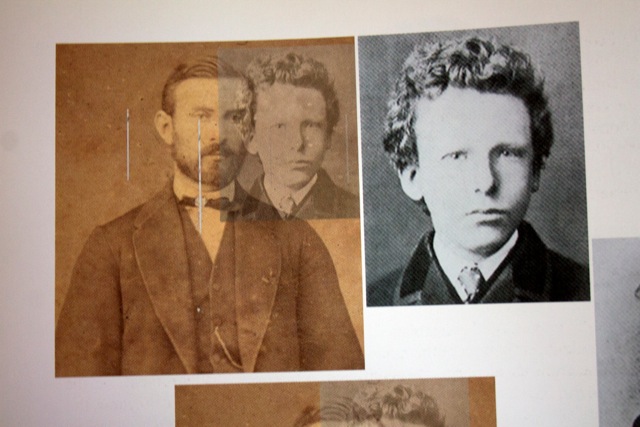 Her ‘man with a pipe’ oil on canvas portrait is believed to be of Dr. Paul-Ferdinand Gachet, the doctor who attended to Van Gogh during the last few months of his troubled life. Gachet lived in Auvers, where van Gogh also lived in 1890, and was a known collector of impressionist art. A number of other Van Gogh portraits of Gachet hang in galleries and private collections around the world. If genuine, it has been valued at a staggering $60m.
Herr Klaus Postupa from the Bundes Archiv in Germany confirms in an email that the Nazi stamp on the back of Doreta’s painting is legitimate. He writes: “As far as I can see they are authentic, the two official stamps belong to the Chief of the Press Office of the Foreign Bureau of the National Socialist Worker’s Party… I believe that these kind of stamps were used during the whole epoch of the Nazi regime.” 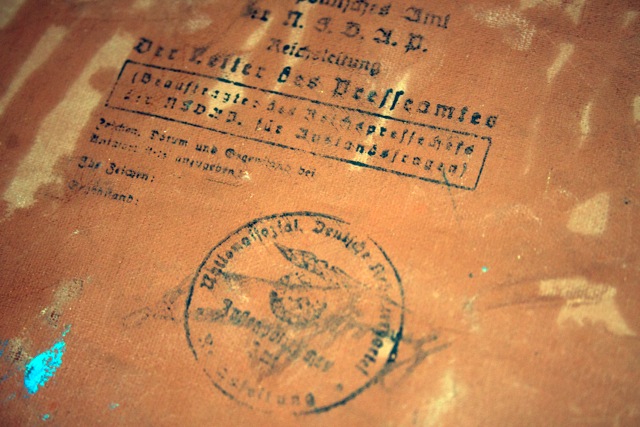 But the link to Hitler troubled the art world: “Dealers told me that this was Nazi art and too much trouble. ‘Forget it’, I was told,” says Doreta. “Dealers in Greece didn’t want to touch it. But I went to great lengths to find out who originally owned the paintings. I even went to Interpol.”

But no works of art matching their description were reported stolen by any collector in the world. And according to Greek law, the paintings legally belong to Doreta. Next, she approached the famous Louvre museum, in France, but found that no one wanted to look at her Van Gogh painting. “Their excuse was that the paintings belonged to the Jews,” she says. But Doreta believes there was another reason for their disinterest.
Doreta believes the very existence of certain pieces in her collection may prove that existing works— hanging in private collections and worth millions of dollars— might be fake. “These galleries and auction houses are nothing less than cartels, and word has gone around that my pieces must not be sold. I have been the subject of terrible bullies in the art world.” 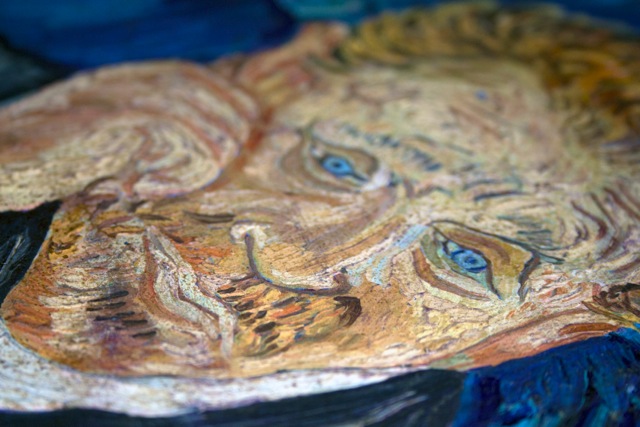 The Van Gogh Museum wrote to Doreta in December of 2006, and requested to see the ‘man with a pipe’ painting. She says that they made her an outrageous offer: “They said they would authenticate it, but the contract they sent me stated they had the right to keep it forever, for free.”
Doreta reveals she has now spent $150,000 trying to authenticate the paintings; including X-rays and various lab tests. “I am very poor. I have spent every penny I have on the authentication. The art world has even disputed lab tests I’ve had done on the paint. I spent so much money on the painting that I lost my home. We had to sell up. I don’t even want to sell the painting, all I want is for them to admit it’s real.”
Today, Doreta lives in a cramped apartment in the center of Athens, and can barely afford to keep the paintings at an expensive vault, where they will be safe. She is still fighting to prove her collection’s provenance. Until then, she says, “I remain the richest poor person in the world.”