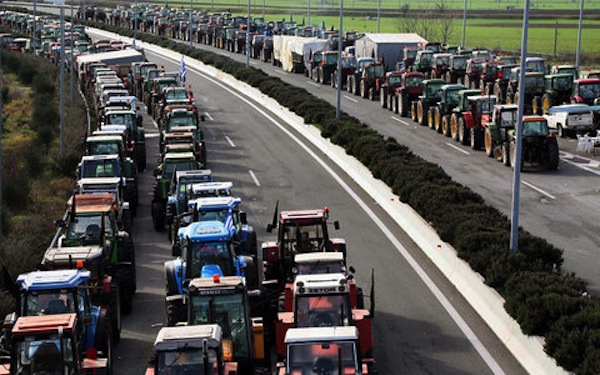 More farmers have been heading towards the road blocks in Northern Greece, Christos Kamtsis, member of the coordination committee for farmers road blocks told ANA-MPA on Tuesday, adding that protests may escalate.
Farmers oppose a measure requiring those with turnover below 40,000 euros to keep accounts on spending and income. They demand a tax-free family income of 20,000 euros, increased by 5,000 euros for each child; that farmers unable to pay debts to the state be not prosecuted; that there is no seizure of property (fields or houses) of property valued up to 300,000 euros and a 30 percent haircut in loans of up to 200,000 euros.
They also hope to reduce production costs (by getting tax-free oil and low electricity rates) and boost livestock breeding.
“Our struggle is not politically motivated. We are deeply concerned for the future of the agricultural sector,” Kamtsis said.
Farmers’ protests so far have been mainly focused in central and northern Greece. The two main road blocks are in Nikeaa on the Athens-Thessaloniki national highway outside Larissa, central Greece and at the junction of Kouloura on Egnatia highway, in northern Greece. At Nikea, tensions flared between police and farmers on Monday, with minor incidents and use of teargas, when farmers attempted to block the Athens-Thessaloniki national highway and were prevented by police.
Costas Lioliopoulos, Vice President of the Imathia farmers’ movement, told ANA-MPA that farmers were expected to decide within the day whether they would block Kouloura junction and said they were even considering rallying in Athens and the Finance ministry in particular.
According to the farmers’ Coordinating Committee, approximately 30-40 roadblocks will be set up across the Athens-Thessaloniki national highway and regional network in northern Greece within the week.
(source: ana-mpa)