GRNews
GreekReporter.comGreek NewsEconomyGreece: Troika Success Story or a Warning Against Too Much Austerity?

Greece: Troika Success Story or a Warning Against Too Much Austerity? 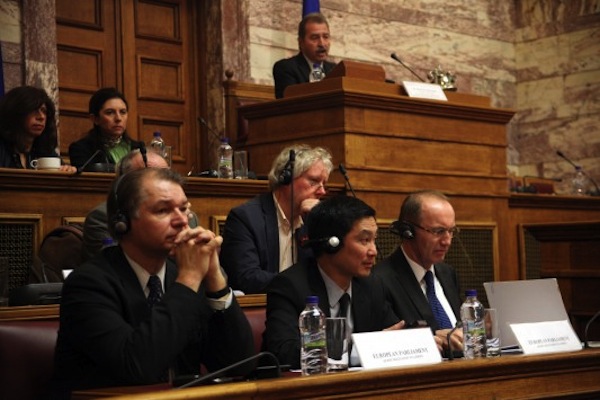 Much has happened since Greece approached its EU partners for help in dealing with the debt crisis engulfing the country in 2010. The needed loan came at the cost of having to cut social services, pensions and salaries in order to help lower its public debt. A Parliament delegation is visiting Greece on 29-30 January to find out how this cure prescribed by the Troika has affected the country.
The delegation visit is a part of the Parliament’s inquiry into how austerity policies have affected countries that have requested the EU’s help in dealing with their financial problems. MEPs have already visited Ireland, Portugal and Cyprus.
The inquiry is led by Othmar Karas, an Austrian member of the EPP group, and Liem Hoang Ngoc, a French member of the S&D group.
Increasing debt
Greek public debt averaged just under 104% of its gross domectic product (GDP) during 1994-2009 and reached 148.3% in 2010, the year when Greece asked the EU for help. However, austerity seems to have made the situation worse. The European Commission estimates Greek public debt to have reached 176.2% of GDP in 2013 and forecasts it to fall to 170.9% in 2015.
Drastic drop in GDP
According to Eurostat, the Greek economy has shrunk for six years in a row.The worst reduction was in 2011 when the GDP decreased by 7.1%. This year a 0.6% increase is expected, followed by 2.9% growth next year.
Widespread unemployment
Unemployment rate is expected to remain at around 25% for the next couple of years. When Greece asked for help in 2010, it was only 12.6%.
Protests
Since 2010 the Greek people have taken to the streets many times to protest cuts in pensions and salaries as well as the deterioration of health and other social services as a result of austerity measures.
Parliament concerns
Over the last few years MEPs have often questioned how efficient the Troika’s policies have been. When EP President Martin Schulz visited Greece in February 2012, he commented: “As representatives of the peoples of Europe, we are convinced that budgetary consolidation must not imperil social justice.” He added that since the start of the crisis the EP has been consistent in advocating solidarity and a balanced mix of measures that includes debt reduction as well as growth initiatives.
The Troika’s work was also cricitised. by Sharon Bowles, a British member of the ALDE group. Ms Bowles, who is the chair of the economic committee, said in November 2013: “Although there are positive signs in programme countries thanks to the concerted effort of governments and the people, the Troika’s overall response to the crisis has lacked transparency and, at times, credibility.”
(source: Press releases EU)