GRNews
GreekReporter.comGreek NewsArchaeologyTIME: 'Privatization Will Save the Treasure of Ancient Greece'

TIME: 'Privatization Will Save the Treasure of Ancient Greece' 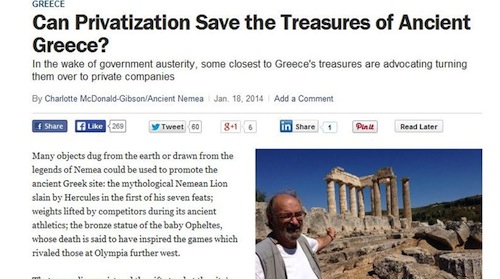 The well-known magazine TIME, conducted  a thorough report on the exploitation of the ancient Greek antiquities and treasures. In particular, the article mentions the way that Greek antiquities can be saved and therefore how this treasure could give a boost to Greece’s economy. The magazine suggests that this can be achieved by partial privatization. In other words, private security companies must take over the surveillance of those antiquities. Thus, the archeological sites will attract more tourists.
TIME: “Many objects dug from the earth or drawn from the legends of Nemea could be used to promote the ancient Greek site: the mythological Nemean Lion slain by Hercules in the first of his seven feats; weights lifted by competitors during its ancient athletics; the bronze statue of the baby Opheltes, whose death is said to have inspired the games which rivaled those at Olympia further west.”
The article continues with Stephen Miller, a 72 year-old archeologist who expresses his frustration due to the lack of hotels and restaurants to serve visitors to the sites. “The Ministry of Culture does some things very well: it does conservation work extremely well, they are very good at setting up exhibitions. They are lousy businessmen”, says Miller.
The magazine also makes a special mention to Miller’s suggestion. The American archeologist claims that his solution “will generate jobs and protect Greece’s vast archaeological wealth from the ravages of an economic crisis which has closed down ancient sites, shuttered museums and caused looting to surge. In a detailed proposal sent to the government at the end of last year, he suggests letting private companies take over the development, promotion and security of certain under-exploited sites in exchange for a share of revenue generated from tourists.”
The Time comments on this proposal: “The proposal may not seem too radical at a time when Italy is letting a fashion company sponsor The Colosseum, Britain is privatizing certain services at some iconic museums, and other European nations are selling off job lots of historic buildings as budgets dwindle. But any suggestion of letting Greece’s vast cultural riches fall out of government hands stirs deep nationalist sentiment in a country scarred by repeated plundering by foreign nations. The depth of the crisis, however, means private sector involvement in the vast treasures of Greece is not the political taboo it once was.”
Last but not least, the magazine hosts the statements of the Greek Minister of Culture, Panos Panagiotopoulos, on the issue.
TIME: “The culture minister right now rejects any suggestion of handing over administration of sites. “The cultural wealth, the legacy of this country, will remain under state control because it belongs to the Greek people,” says Panagiotopoulos. But he does not rule out greater private sector involvement in other areas, and says parliament recently passed a measure allowing tour companies to effectively rent out archaeological sites for an event or an out-of-hours visit. Businesses can now also shoot their commercials against the backdrop of Greece’s dramatic monuments.”