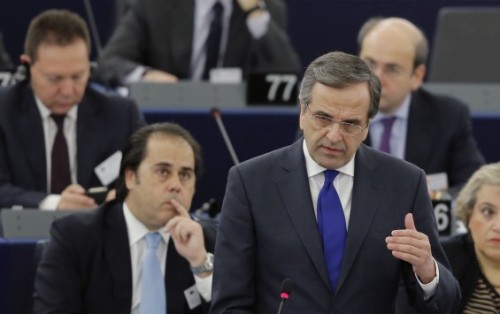 Greece’s Prime Minister, Antonis Samaras, attended the European Parliament on Wednesday, January 15, in order to present and describe the priorities of the Greek EU presidency. However, what he received was an outburst and criticism from British MEP Nigel Farage, leader of the UK Independence Party, who it would be fair to say is not a supporter of the EU project.

Mr. Farage did not restrain himself and attacked the Greek Prime Minister whom he called former Goldman Sachs’ employee-puppet, along with Giorgos Papandreou and Lucas Papademos.

Mr. Farage stated: “Well I have to congratulate you, Mr Samaras, for getting the Greek presidency off to such a cracking start. I’m sure we’ll have them dancing in the streets in Athens, no matter that your country, very poorly advised by Goldman Sachs, joined a currency that it was never suited to, no matter that 30% are unemployed, that 60% of youth are unemployed, that a Neo-Nazi party is on the march, that there was a terrorist attack on the German embassy. No don’t worry about all that because the trilogue on MiFID has been a success.”

“And you come here Mr. Samaras and you tell us that you represent the sovereign will of the Greek people? Well, I’m sorry, but you’re not in charge of Greece, and I suggest you rename and re-brand your party – it’s called ‘New Democracy’, I suggest you call it ‘No Democracy’. Because Greece is now under foreign control. You can’t make any decisions, you’ve been bailed out, and you’ve surrendered democracy, the thing your country invented in the first place,” he continued.

Referring to Mr. Samaras, Farage said: “You can’t admit that joining the euro was a mistake – of course Papandreou did that didn’t he, he even said there should be a referendum in Greece and within 48 hours, the unholy trinity (troika) that now run this European Union had him removed and replaced by an ex-Goldman Sachs employee puppet. We are run now by big business, big banks and in the shape of Mr Barroso, big bureaucrats.”

While Farage kept badgering the Greek Prime Minister, Samaras did not lose his self-control. His answer to the first was restrained and simple. “I want to thank Mr. Farage on the lecture of what democracy is and what it is not. I would have appreciated even more if, besides all the lecturing, there could have been some hint of solidarity. I saw none. Some may not be happy that Greece did not give in to the exit scenario.”