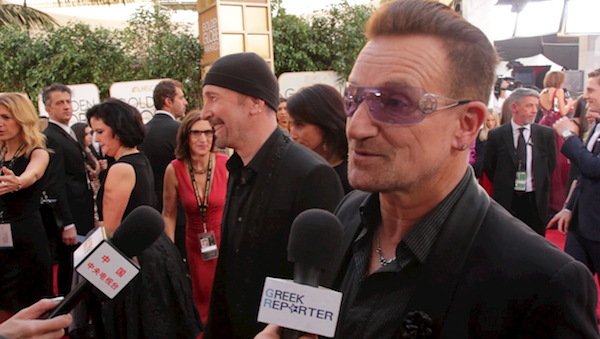 The Golden Globes are considered the most fun awards show in the entertainment industry, and Greek Reporter’s Anastasios Papapostolou was there to catch up with many of our favorite Hollywood stars on the 71st Annual Golden Globe Awards red carpet:

Mike Tyson said that this year’s show was one of the best he ever attended, while Michael Douglas and Robert Redford admitted that they are big fans of Greece!

Bono from U2, who won the Golden Globe for Best Original Song, sent a message to those who bet against Greece:

“I don’t know so much about Greece [politics], but I know a lot of Greek people and I will never bet against them!”

Adele Exarchopoulos, the star of “Blue is The Warmest Color,” admitted that she had never imagined her movie would do so well and get a Golden Globe nomination.

Greek-American director Alexander Payne, whose film “Nebraska” was nominated for five Golden Globes, said that awards offer confidence to the filmmakers to continue their work and advance their business.