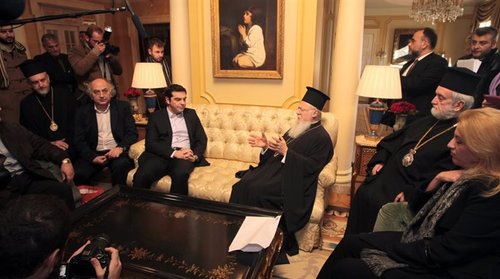 In a meeting on Thursday, Alexis Tsipras, the president of SYRIZA, asked for the support of Ecumenical Patriarch Bartholomew and churches from other countries on the universal humanitarian request for a change on the current migration policy. That policy as Mr. Tsipras stated, had turned the Mediterranean into a cemetery and receiving countries into storehouses of human souls.

As Mr. Tsipras pointed out, the migration issue is probably as important as the issue of accumulated debt. “We believe that solidarity along with a change on current migration policy are two points where European Left’s beliefs coincide with the Orthodox Church’s values,” added the president of SYRIZA.

During the meeting, Alexis Tsipras informed the Ecumenical Patriarch of his candidacy campaign for the presidency of the European Commission, focusing on three main points: Firstly, on the economic crisis and the need for immediate termination of austerity measures, which are causing a humanitarian crisis and are against European values, secondly on environment protection and thirdly on the renegotiation of migration policy.

The Greek War of Independence had many heroes. The first names that come to mind are: Kolokotronis, Karaiskakis, Papaflessas, Bouboulina, Diakos, Kanaris
Diaspora