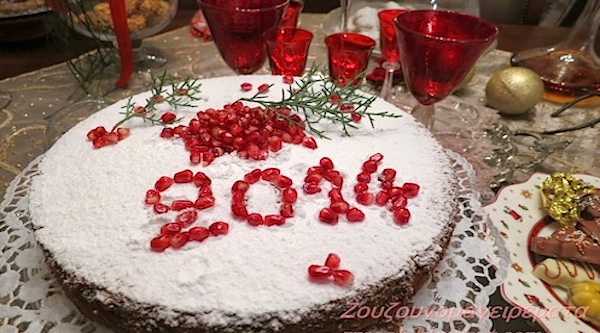 Vasilopita, as Greek tradition dictates, is cut by families on New Year’s Day to bless the house and bring good luck for the new year. This is usually done at midnight of New Year’s Eve in Greece. A coin is hidden in the bread by slipping it into the dough before baking. At midnight, the sign of the cross is etched with a knife across the cake. A piece of cake is sliced for each member of the family and any visitors present at the time, by order of age from eldest to youngest. Slices are also cut for various symbolic people or groups, depending on local and family tradition. They may include the Lord, St. Basil and other saints or the poor, the household, etc. The variations of the recipes are countless.
But where did this custom come from?
In popular tradition, vasilopita is associated with a legend of Saint Basil. According to one story, St. Basil called on the citizens of Caesarea to raise a ransom payment to stop the siege of the city. Each member of the city gave whatever they had in gold and jewelry. When the ransom was raised, the enemy was so embarrassed by the act of collective giving that he called off the siege without collecting payment. St. Basil was then tasked with returning the unpaid ransom, but had no way to know which items belonged to which family. So he baked all of the jewelry into loaves of bread and distributed the loaves to the city, and by a miracle (some believe that the miracle took place after the Divine intervention of Saint Mercurius, along with some angels), each citizen received their exact share, as the legend goes. In some variations of the story, the sieging chieftain is replaced with an evil emperor levying a tax, or simply with St. Basil attempting to give charity to the poor without embarrassing them.
There is also an alternative explanation about the origins of the vasilopita. This story connects both the western and the eastern celebrations to the ancient Greek Kronia, the festival of King Cronus, which involved selecting a “king” by lot and then the Roman Saturnalia.