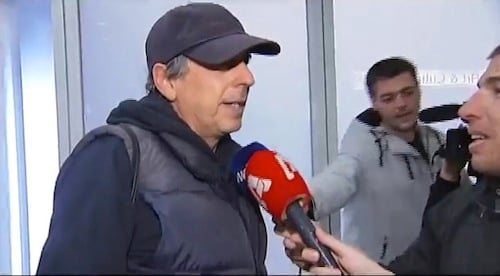 Michalis Liapis, the former Minister of transport returned to Athens after his holidays in the exotic location of Malaysia. Liapis arrived on Friday afternoon, although his return was originally scheduled for January 9.
The authorities of Eleftherios Venizelos airport have taken security measures in order to protect the former minister from a possible angry reaction of the people. “It was not a pleasure trip. I wanted to relax and forget my adventure.” said Liapis who like every pensioner struck by the crisis, chose a cheap and nearby destination in order to calm down.
The former transport minister attacked the journalists as he claimed that they didn’t respect his difficult moments. “It was a tiring trip. I wanted to relax but I couldn’t because of you.” he said.
Liapis returned to Athens in order to attend his trial which is scheduled for Monday, December 30.
Liapis was arrested by the police after he was caught driving a luxury car with fake plates, using the number of its proper ones, which had already been filed. He allegedly told the police: “I have homemade signs so I can take small rides.” The authorities also found that he did not have a driver’s license and that the car was uninsured.
On Monday he will face charges of forgery, false certification and use of an uninsured vehicle. Reportedly his lawyers advised him to be particularly careful and avoid comments.