GRNews
GreekReporter.comGreek NewsCultureGreek Archbishop of America: 'Hagia Sophia Must Not Become a Mosque'

Greek Archbishop of America: ‘Hagia Sophia Must Not Become a Mosque’ 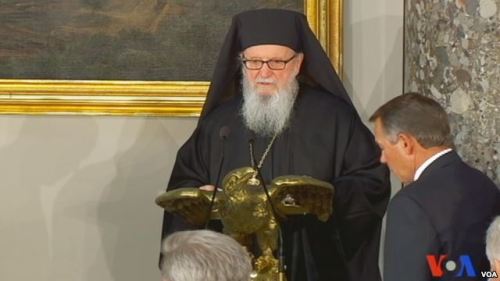 Archbishop of America, Demetrios, expressed his deep concern over the statements of turning Hagia Sophia of Istanbul into a Muslim mosque.

In a related announcement of the archdiocese, “His Eminence Archbishop Demetrios, Primate of the Greek Orthodox Archdiocese of America, expressed his grave concern over current rhetoric by some Turkish state officials regarding the intention to convert the historic Hagia Sophia (the magnificent 6th-century Orthodox Christian Cathedral of the Ecumenical Patriarchate of Constantinople) from a museum to a functioning mosque. Such a step might be interpreted as an expression of intensification of state Islamisation policies causing an elimination of Christianity from its 2000-year presence in its lands of origin.”

Hagia Sophia’s significance as a religious site and globally recognized symbol of intercultural respect and sacred beauty is reflected in the 1985 UNESCO designation of Hagia Sophia as a world heritage site. The Archbishop stated, “If any shift should occur from the current use of Hagia Sophia as a museum, then the Turkish government should allow it to operate as originally intended and as it functioned for almost 1000 years, as a Christian Cathedral and not as a mosque.”

At the same time, the largest organizations of the Greek community in the USA have already started making intense efforts to halt the realization of this plan.

A few days ago, the Hellenic American Leadership Council (HALC) handed US Congress a letter signed by more than 25 ,000 Greek citizens of the USA, asking the prevention of the convert of Hagia Sophia to a Muslim mosque. Similar actions were taken by the largest organization of Greeks in the USA, AHEPA.

In a related announcement released by AHEPA, it mentioned that a letter was sent to UNESCO for the preservation of Hagia Sophia, which has been declared as a World Heritage Site. In the same letter, phone numbers and e-mail addresses of international organizations, relevant committees of the American Congress, and even of the Turkish Ministry of Culture, were enclosed in order for AHEPA’s members to address their complaints towards a potential conversion of Hagia Sophia to a mosque.