Falkonera the Titanic of Greece… 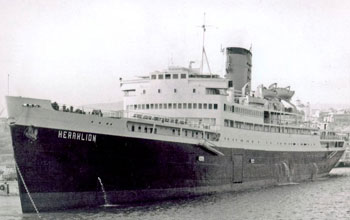 December 8th, marked the 47th anniversary of one of the worst maritime accidents in Greece, widely known as the “Falkonera Shipwreck.” 217 people drowned. The ferryboat “Heraklion” sailed from Souda Bay, Crete to the port of Piraeus with a crew of 73 and 191 passengers on board at 8:00 pm on Dec. 7, 1966. Gale force winds of 9 Beaufort magnitude blew.
At around 2:00 am, almost halfway through the voyage and while sailing south of the small rocky island of Falkonera, a refrigerator truck carrying oranges that was loosely strapped started banging into one of the loading doors. The door eventually opened and the truck plummeted into the sea, allowing the water to flood the ship’s holds. It took between 15 and 20 minutes for the vessel to capsize.
It was at 02:06 a.m. on Thursday, Dec. 8, 1966, when the distress signal “SOS from Heraklion at 36Â° 52′ N 24Â° 08′ E. ‘We are sinking’” was sent out. The ferryboat sank, taking with it a total of 217 passengers and crew members. Only 30 passengers and 16 crew members were rescued.