2 Missing in Rhodes Due to Bad Weather 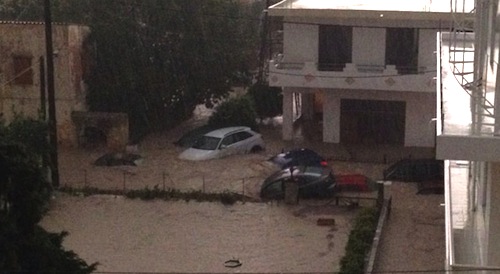 Two people are missing in Rhodes, Greece because of the unprecedented storm that hit the island.
According to what eyewitnesses revealed in the newspaper “RHODES,” two people were blown away from the bridge of Kremasti as they were trying to get out of their car, and one other person in the area of Archangelos.
The first two people in Kremasti, were teachers driving in their car with another colleague. When they reached the river, their car started to drift, and in their effort to escape, all three of them got out.
It was a 50 year-old man, a 30 year-old woman and a 30 year-old man, all of them teachers at the same school. The fire brigade managed to save one of them, while the 50 year-old man and the 30 year-old woman drifted away and have been missing since.
Many streets on the island have turned into rivers and huge problems have arisen in the center of the town due to the rain.
Many areas on the island are currently without electricity due to lightning shutting down many lines, while a number of basements of houses and stores have been flooded.
Due to bad weather, the fire department has received 130 calls for assistance and water pumping. Within just a few weeks Rhodes has once again been hit by storms.