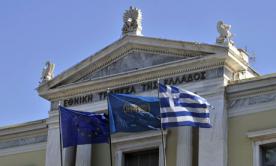 National Bank of Greece, the country’s largest lender, reached an agreement to sell most of its real estate unit in a transaction that values the company at more than 1 billion euros, two people with knowledge of the matter said.
The sale of a majority stake in Pangaea REIC to Invel Real Estate Partners, a London-based real estate investment firm led by Christophoros Papachristophorou, was approved by the Hellenic Financial Stability Fund, according to the people, who asked not to be identified because the information isn’t public. The HFSF is a fund set up under the euro area and International Monetary Fund to recapitalize Greek banks.
The deal will close by the end of the year, the people said. NBG, based in Athens, said last month it was in talks with Invel about a deal, though a valuation wasn’t disclosed.
(source: bloomberg)