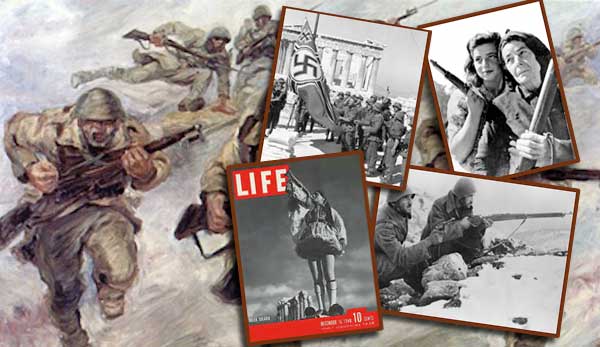 On October 28th, millions around the world will commemorate OXI Day, a day honoring Greece’s courageous resistance during WWII.
On October 28th, 1940, the Italian ambassador to Greece, Emanuele Grazzi delivered an ultimatum from Benito Mussolini to Prime Minister Ioannis Metaxas. The ultimatum was demanding the entry of the Italian army and the occupation of Greek territory.


When Metaxas was faced with this demand, he delivered an unequivocal response in French, (the diplomatic language of the day) “Alors, c’est la guerre.” This brief phrase, “Then, it is war,” was quickly transmuted into the laconic “Oxi” by the citizens of Athens.
Ioannis Metaxas had begun his career in the Greek army, eventually entering politics as a staunch royalist. By 1936 he held the post of Minister of War. That same year, a deadlocked election led King George II to appoint Metaxas to the position of Prime Minister.

Within four months, Metaxas had declared a State of Emergency and suspended Parliament. For the remainder of his life, he ruled as a dictator. He is a deeply controversial figure in Greek history but his actions on October 28th contributed to the ultimate victory of the allied forces.
Metaxas addressed the Greek people with these words:
“The time has come for Greece to fight for her independence. Greeks, we must now prove ourselves worthy of our forefathers and the freedom they bestowed upon us. Greeks, fight now for your Fatherland, for your wives, for your children and the sacred traditions. The struggle is now for everything!”
Watch the gallery below:

In response to this address, the people of Greece spontaneously went out to the streets singing Greek patriotic songs and shouting anti-Italian slogans. Hundreds of thousands of volunteers, men and women, in all parts of Greece, headed to army recruitment offices to enlist. The whole Greek nation was united in the face of aggression.
Meanwhile, Italian forces entered Greece through a rough, wild terrain- the steep Pindos Mountains. There they met fierce and unexpected resistance. As Italian troops moved southward towards the city of Ioannina, Greek troops took to the heights, bombarding the Italians from above.
On January 29th, 1941, Prime Minister Metaxas died suddenly and unexpectedly from an inflammation of the pharynx that led to a toxic infection. Alexandros Koryzis, the Governor of the Bank of Greece, succeeded him in office.
In March of 1941 Mussolini personally supervised a ferocious counterattack designed to drive the Greeks from Southern Albania. Despite his leadership, the attack failed, further humiliating the Italian leader, leaving him humiliated and enraged. Hitler was also furious at what he perceived as Mussolini’s blunder.
In addition, on April 18th, Prime Minister Koryzis chose to shoot himself rather than face the German entry into Athens; German motorcycle troops entered the city, driving straight to the Acropolis where they tore down the Greek flag and replaced it with a Swastika.
The Greeks fought long and hard for victory; for six months they occupied the Italian army, preventing them from advancing. In the end, the Germans were forced to delay the invasion of Russia in order to subdue the Greeks when the Italians failed in their efforts. This delay proved fatal for the Germans, extending their campaign against the USSR into the brutal winter.
Metaxas’ response resulted in a fatal diversion and delayed the Axis powers in general, specifically the German army. British military historian Sir John Keegan describes the Battle of Greece as “decisive in determining the future course of the Second World War.”
Winston Churchill believed that Greeks were inspired by their own heroic past, to wage a fierce fight against all odds. He paid homage to the Greek resistance by claiming,
“…until now we would say that the Greeks fight like heroes. From now on we will say that heroes fight like Greeks.” Every October 28th, Greeks at home and abroad honor the past by celebrating “Oxi” Day.