GRNews
GreekReporter.comHollywoodChristopher Papakaliatis Reflects on Golden Globe Consideration; "What If…" Screened in LA

Christopher Papakaliatis Reflects on Golden Globe Consideration; “What If…” Screened in LA 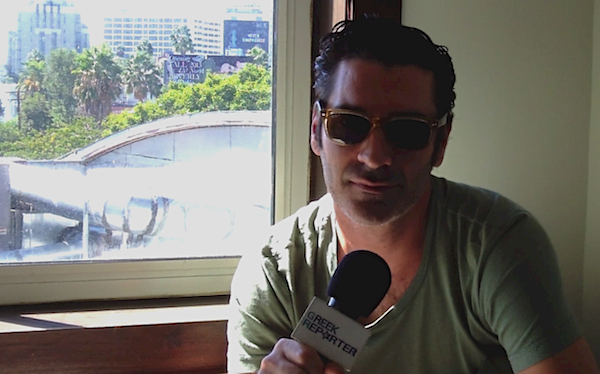 Video: Greek Filmmaker Christopher Papakaliatis’ reflects on Golden Globe consideration for his film  “What if…”

On Tuesday October 15th, Christopher Papakaliatis’ What If… was screened at “Clarity” theatre in Beverly Hills. The Greek film is considered for a Golden Globe nomination thus many members of the Hollywood Foreign Press Association were present at the screening.

The screening was followed by a Q&A with Christopher Papakaliatis. During the screening  the audience  was taken through an unprecedented emotional roller coaster  that resulted in gasps and laughter.

What if… deals with love, death, relationships, aging and the financial crisis. The film serves as meta-cinema showing the director directing his own film just like in Fellini’s 8 ½.

Watch our interview with Christopher below:

At the end of the film the amount of appraisal Christopher received was tremendous with terms such as “genius” and  “the new Woody Allen” being tossed around the audience. It was generally agreed that no other film has yet to so successfully intermingle the Greek financial crisis with relationships and how these two affect one another.

In addition, thanks to the international buzz the film has received, it is constantly raising awareness abroad on the seriousness of the situation by appealing to audiences on an emotional level so that they may get a first-hand experience of the turmoil.

At the Q&A, Christopher discussed the making of the film, what he wants to achieve and the difficulty he had raising money in such a harsh financial environment.

The Greek filmmaker also mentioned that he is already in the works to produce a new film. The event was organized by the Los Angeles Greek Film Festival and was followed by a reception at the Greek Consul general’s residence in Hollywood.