Calisthenics, the Yoga of Greeks 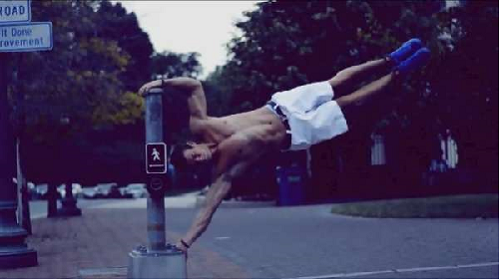 The first official Calisthenics team of Greece consists of three men : Tasos Voreas, Dimitris Giampouras and Angelos Andriotis. The name of this team is Greek Calisthenics movement, and its goal is to bring back the ancient Greek training system into the lives of Greeks.
Their dream is to make this movement an everyday routine for Greeks and then promote it and make it one of the most popular ways of exercising. As they stated: “We want Calisthenics to be for the Greeks, what Yoga is to Indians.”
Not only the word Calisthenics but also the word Calisthenic Agoge, are words of ancient Greek roots and originate from the word kallos which means beauty and strength (both physical and mental). It is not a separate sport, but a training system that people can do every day to keep in shape and in good physical condition, as well as professional athletes who want to achieve peak performances.
The Calisthenic training system mainly includes aerobic exercises, which involve using only the body weight for resistance and little or no equipment at all. This method acts very naturally, and brings impressive results on muscle growth while it develops excellent skills of balance, body control and neuromuscular coordination.
According to Herodotus, when Xerxes sent spies to watch the military camp of Sparta, they said the Spartans exercised  their bodies with synchronized and rhythmic movements, a fact that was misinterpreted by the Persians as a form of dancing and therefore a sign of weakness. Now everyone knows how wrong they were.
At the moment Calisthenic Agoge, is becoming very popular in American ghettos, mostly in parks, but under a different name, Street Workout. Some still use the Greek name Calisthenics, which is considered to be the original one.