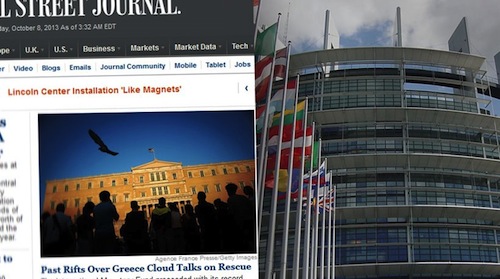 Even while the International Monetary Fund in 2010 was agreeing to dubious plans to bail out the faltering Greek economy – a joint effort with the European Union and European Central Bank in what became known as the Troika – secret documents at the agency showed there was deep worry and anger over whether the monies could be repaid, with some members urging a deep cut of the Greek debt instead.
The naysayers turned out to be right as austerity measures demanded in return for $325 billion in two bailouts deepened the country’s recession, created record unemployment, closed 110,000 businesses and did little to cut the debt while imposing big pay cuts, tax hikes, slashed pensions and the coming firing of thousands of public workers.
The IMF in June this year admitted austerity had failed – and said it would keep on demanding more and more in a desperate bid to keep Greece from going under. Minutes of IMF  board meetings held in May 2010 and published by the Wall Street Journal have highlighted the concern of many country representatives that the Greek bailout was not sustainable.
One of the key criticisms expressed during meetings held before Athens agreed its first bailout with its Eurozone partners and the IMF is that the design of the bailout favored European banks at the expense of Greece.
The absence of debt restructuring at the beginning of the program also met with opposition, according to the extracts from confidential documents reported on by the paper.
“The risks of the program are immense … as it stands, the programs risks substituting private for official financing. In other and starker words, it may be seen not as a rescue of Greece, which will have to undergo a wrenching adjustment, but as a bailout of Greece’s private debt holders, mainly European financial institutions,” said Brazil’s IMF Executive Director Nogueira Batista at a board meeting on May 9, 2010. He was reprimanded by his country earlier this year for raising new doubts that Greece could ever repay its loans.
According to the Journal, IMF records show that nearly a third of the board’s members, representing more than 40 non-European countries, raised major objections to the bailout’s design at the meeting.
“The alternative of a voluntary debt restructuring should have been on the table…The European authorities would have been well advised to come up with an orderly debt restructuring process,” said Argentina’s Executive Director Pablo Andrés Pereira. “The bottom line is that the approved strategy would only have a marginal impact on Greece’s solvency problems … it is very likely that Greece might end up worse off after implementing this program.”
“We have considerable doubts about the feasibility of the program … we have doubts on the growth assumptions, which seem to be overly benign,” said Swiss Executive Director Rene Weber, stunning European counterparts on the board who the paper said were trying to protect German and French banks and private investors.
“Even a small negative deviation from the baseline growth projections would make the debt level unsustainable over the longer term … why has debt restructuring and the involvement of the private sector in the rescue package not been considered so far?” Weber asked.
Directors from Brazil, Russia, Canada, Australia – representing 38 additional countries – worried about the “immense risks” of the program, the WSJ reports.
“The scale of the fiscal reduction without any monetary policy offset is unprecedented…(It) is a mammoth burden that the economy could hardly bear,” said India’s representative Arvind Virmani. “Even if, arguably, the program is successfully implemented, it could trigger a deflationary spiral of falling prices, falling employment, and falling fiscal revenues that could eventually undermine the program itself.”
According to the minutes of the May 9 meeting: “Several chairs (Argentina, Brazil, India, Russia, and Switzerland) lamented that the program has a missing element: it should have included debt restructuring and Private Sector Involvement (PSI) to avoid, according to the Brazilian ED, ‘a bailout of Greece’s private sector bondholders, mainly European financial institutions.’ The Argentine ED was very critical at the program, as it seems to replicate the mistakes (i.e., unsustainable fiscal tightening) made in the run up to the Argentina’s crisis of 2001.”
However, approval from US and most European directors mean accounted for more than half of the IMF’s voting shares and paved the way for the first Greek bailout, worth 110 billion euros, to be signed. It failed, and Greece needed a second, for 130 billion euros.
That has failed too and now there is growing talk a third will be needed along with Greece not paying its loans in full – except to the IMF, which has demanded full payment while endorsing a plan to let the country stiff the EU and ECB and let taxpayers in the other 16 Eurozone countries  pick up the tab for generations of wild overspending by the Greeks.