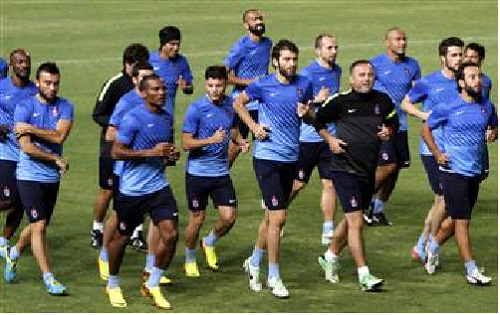 The professional Turkish football club, Trabzonspor, nicknamed The Black Sea Storm, arrived at Larnaca Airport in  Cyprus, for the Europa League match with Apollon Limassol, from Trabzon, Turkey, with the first direct flight to Southern Cyprus since 1974.
According to the Turkish Cypriot press, the flight was carried out by the Greek airline company Astra and firstly it was announced that a stop on the island of Rhodes would be made and that then the flight would continue to Larnaca.
This obligatory stop at Rhodes is due to diplomatic problems between the two countries. There are currently no direct flights from Turkey to Greek Cyprus.
However, according to information, after the plane had taken off from Trabzon, the pilot announced that the route had been changed and that they would be flying directly to Larnaca.
As a result of the Turkish Foreign Ministry’s initiatives, the pilot, while the plane was in the air, contacted the Cypriot authorities and after the positive response, he proceeded to landing in Larnaca.
The Trabzonspor delegation was on board along with the club’s president İbrahim Hacıosmanoğlu, members of the management board and Turkish journalists.
Moreover, according to the newspaper Fileleftheros, the Greek-Cypriot pilot who recently left Cyprus Airways was hired by Turkish Airlines.