Anti-fascist Demonstrations Around Europe for Fyssas 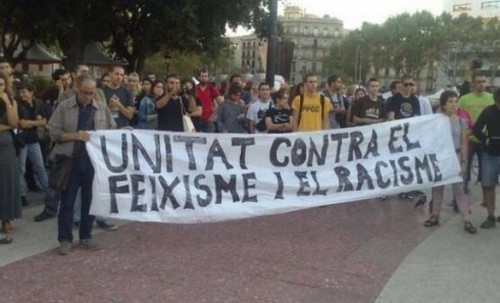 A protest took place in Barcelona, Spain, on September 18, spurred by the murder of the 34-year-old anti-fascist.

In Brussels, Belgium’s capital, the Struggle Committee of Greek Immigrants in Brussels is calling for a protest gathering on September 19, at 5.00 p.m., in front of the Brussels Stock Exchange. “All around Europe, we have to condemn these fatal attacks by the group of the fascist neo-Nazis of Golden Dawn,” as reported in their announcement, pointing out, “Never again fascism.”

A protest gathering is planned to take place in Paris, France, on September 19, at 7.00 p.m. It is organized by students, members of ANTARSYA and SYRIZA, as well as by French anti-capitalism and left-winged organizations who have called people to assemble at St. Michel square.

An anti-fascist mobilization will be held in Amsterdam, the Netherlands, at 6.30 a.m., in Dam Square.

“Express your solidarity to Golden Dawn’s victims and spread the news about the murder of the anti-fascist Pavlos last  night in Athens, Greece,” the group Reinform wrote on Facebook.

A mobilization is organized to take place in London, UK, at 1.00 p.m, in front of the Greek Embassy.