Galifianakis Misses Film Premiere After His Wife Goes into Labor 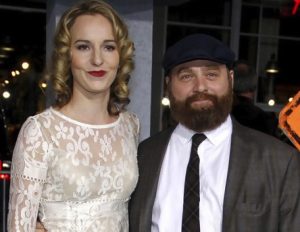 Zach Galifianakis and his wife, Quinn Lundberg, not only did a really good job of keeping their wedding under wraps last year, but they also surprised everyone when the actor missed the premiere of his latest film because they are about to become parents.

Galifianakis skipped out on the Toronto Film Festival premiere of “You Are Here,” and director Matthew Weiner confirmed to E! News that the soon-to-be dad couldn’t make it because Lundberg went into labor.

“We literally found out on Friday,” Weiner told the news outlet, adding, “Zach is going to be the best dad in the world.”

This will be the first child for the couple, who were married in August 2012 but have yet to publicly admit that they got hitched. Galifanakis’ manager also confirmed the news to E!, saying, “[Zach] missed the premiere because his wife is very pregnant and about to give birth and he did not want to take the chance of not being in LA if she went into labor.”

Congrats to them both!

RELATED: Watch our interview with Zach Galifianakis at the Hangover 3 Premiere