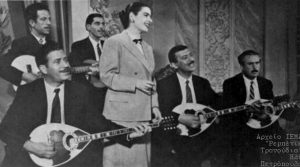 Anna Chrysafi, the first Greek singer ever to sing standing is no longer among us. The memorable singer, died at the age of 92 on September 2 in Kalyvia, Attica, where her beloved said their last goodbye.
With a singing career that continued from the late 1940’s until today, Anna Chrysafi was a true stage veteran. She was born in Athens in 1921 to Asia Minor refugee parents. With several musicians in her family, Anna started her working life as a seamstress. Her first appearances as a singer were in 1949 at the Athenian cosmopolitan tavern Rosiniol and her first recordings were made with Yorgos Mitsakis. Their collaboration continued for some seven years.
She worked with all of the greatest names in the rebetiko history – Yiannis Papaioannou,Vasilis Tsitsanis, Sotiria Bellou, Markos Vamvakaris, Takis Binis and many others. Thanks to the revival of interest in the rebetiko and post-war popular songs that began to gather force in the 1970’s and showed no sign of abating, Anna Chrysafi was an unforgettable active presence in the Greek popular music scene.