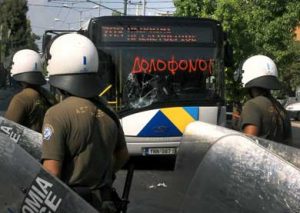 A trolley bus line in the western Athens neighborhood of Peristeri was shut down on Aug. 16 as protests were carried out in the aftermath of the death of a 19-year-old man who police said accidentally fell out of a bus and hit his head and died after an altercation with an inspector who was going to fine him for not having a bus ticket.
The family of Thanassis Kanaoutis, a technical school student,  appealed to witnesses to come forward as demonstrations accompanied the young man’s funeral that was attended by some 1,000 people.
Police staged a reconstruction of the accident, examining the doors of the vehicle and Ministry Transport officials said inspection methods and safety procedures would be reviewed. They also launched an internal investigation to determine whether the driver of the No 12 trolley bus and the ticket inspector who allegedly argued with the 19-year-old prior to his fall should be held accountable.
A crowd of protesters gathered here Kanaoutis died and some set garbage dumpsters alight and threw stones at passing trolley buses but there were no injuries reported. An autopsy was expected to provide further information on his death.
The major opposition Coalition of the Radical Left (SYRIZA) party said that Kanaoutis died because he couldn’t afford a 1.20 euro ticket and that his death showed how desperate society has become in the wake of a crushing economic crisis and harsh austerity measures being imposed by the government on the orders of international lenders. Bus fare evaders face a 72 euro ($95 fine) and uses paper tickets that must be validated in a machine on the bus, which is often so crowded they can’t be reached.
Government spokesman Simos Kedikoglou, representing the coalition headed by Prime Minister Antonis Samaras, the New Democracy leader, and his partners the PASOK Socialists, accused SYRIZA of “seeking to exploit a tragic occurence for political gain.”
SYRIZA also condemned Athens transport authorities’ practice of giving ticket inspectors a cut of the fines they impose as an incentive to address widespread fare-dodging. The party demanded free transportation for the unemployed, low-income pensioners and students.
The anti-austerity I Won’t Pay group, which advocates non-payment of public transportation fares, highway tolls and utility bills, hailed the youth as “the first dead fighter for civil disobedience.”