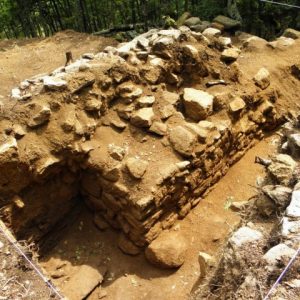 A large votive relief of the ancient Father of Gods and men, Zeus, was discovered by the archeological team of Dr Ivan Hristov close to the archaeological excavations of Bulgaria’s National Museum of History at the Kozi Gramadi peak in Severna Gora, close to the village of Starosel.

The news was announced by the National History Museum for the Bulgarian News Agency Focus.

The votive relief of Zeus that was uncovered by the archeological team was much bigger than the ordinary ones, which means that it can possibly be the center of an ancient temple.

“It is bigger than the votive slabs found so far and probably it is the central icon of the ancient temple,” Dr Bozhidar Dimitrov, Director of the National Museum of History, said.

A strange event took place at the moment the votive relief was excavated, which surprised the archeologists. A big imperial eagle appeared flying over them.

In antiquity, Zeus was often portrayed as an imperial eagle and the younger women archaeologists started commenting that Zeus had come to see what they were doing in his temple, as reported in Focus Information Agency.

The Kozi Gramadi stronghold, built in VI-V century before Christ, was capital of a Thracian tribe, which used to live in this part of Bulgaria during antiquity. The popular tombs close to Starosel are in fact the necropolis of the Thracian aristocrats living in the city.

The archaeologists believe that the region was the power center of Ancient Thrace in the 4th century BC. It was destroyed during the rise of the Macedonian state of Philip II in 342-341 BC.