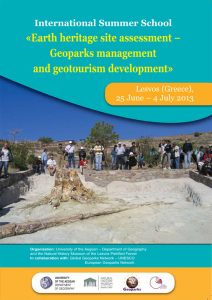 The International Summer School on Geoparks that took place on the island of Lesvos under the title, Earth heritage site assessment ─ Geoparks management and Geotourism Development, was well received by the public.
The Sanin Kaigan National Park of Japan organized a special event to present the activities of Lesvos Geopark, which are considered as very important even by geoparks with long tradition and development, as is this Japanese geopark.
Representatives of the local administration participated in the event, as well as the director and the members of the council of the Sanin Kaigan National Park along with many journalists. During the event, the results of the International Summer School on Geoparks were presented, as well as the content of the conferences and the educational activities in the countryside, the activities for the protection and promotion of the Petrified Forest of Lesvos. Special attention was given to the possibilities for close cooperation between the two geoparks of Lesvos and Japan.
The intensive course Earth heritage site assessment – Geoparks management and Geotourism development that took place on Lesvos Island, Greece, from June 25 to July 4 was organized by the University of the Aegean – Department of Geography in collaboration with the Natural History Museum of the Lesvos Petrified Forest and the Lesvos Geopark along with the UNESCO Global Geoparks Network and the European Geoparks Network.
Twenty-five geopark executives took part in the courses, doctoral candidates and graduate students from Brazil, Japan, Iran, Ireland, Spain, Italy, China, Mexico, Portugal, Turkey, the Czech Republic, Chile and Greece, while leading professors from all over the world gave lessons at the summer school.