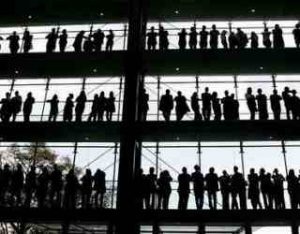 The forecasts for unemployment in 2014 are ominous, according to data in a recent OECD report, which estimate that unemployment will dramatically increase in 2014, leaving 48 million people jobless in 34 member states of the OECD, among which the world’s richest countries.
According to the data of May, unemployment in Greece is at 26,8%, while the forecasts of the economists of the OECD show that unemployment in Greece will be close to 28% by the end of 2014, being ahead even of Spain, for which the corresponding predictions are at 27,8%.
Unemployment in France is expected at 11%, for Italy around 12,5%, while Portugal from 17,6% will reach 18,5% and Ireland from 13,6% will reach 14,1%.
Overall in the Eurozone, unemployment will increase marginally, from 12,2% to 12,23%, with an improvement in the numbers of Germany, from 5,3% to 4,7%. Overall in the member states of the OECD, unemployment is estimated to fall from 8% (May 2013) to 7,8% at the end of 2014.
According to the report, it is estimated that in the USA the unemployment rate will decrease below 7% at the end of 2014.
This year, only five countries were recorded to have an unemployment rate below 5% : Austria, South Korea, Japan, Norway and Switzerland.
Youth unemployment will exceed 60% in Greece, 52% in South Africa, 55% in Spain, while for Italy and Portugal it will be around 40.
“The social wounds caused by the crisis are still far from being healed. Several countries which are our members always face an increased and persistent unemployment rate, especially among the young people,” said Angel Gurría, Secretary-General of the OECD, according to the OECD’s press release. Gurría urged the organization’s member states to “double their efforts” to tackle the phenomenon.
In late May, the OECD member states committed themselves to an action plan in order to speed up their efforts to tackle increased youth unemployment and to strengthen their education systems, in the European Union, for example, by providing resources for young unemployed people, or by taking measures to prevent young people from abandoning their studies.